Well, we're only at the start of the two week marathon, with the No Age/Soiled Mattress and the Springs tour starting proper (for some reason when I think of the word proper I think of Dean saying it in his English geezer accent) today. And the slow sceptre of exhaustion is waving its cheery hand already. Buy hey, there is too much to do AND WE CAN SLEEP WHEN WE'RE DEAD. Or when we're on the tube on the way to work.

Stuff! More thank yous, especially to John Wiese for stepping in so masterfully to replace the stranded Lucky Dragons (hello Luke and Sarah, hope Europe has been kind!) at the ICA last week. More thanks to Hooray for Sex for the jams and to the kind people at the ICA who somehow let us get away with it. And for the free beer, which made for a crazy show, but a free show with free beer, well it was a Bank Holiday. I am trying to get my photos of shows up reasonably promptly, but I'm not in the house much. I'm not doing too bad so far, and you can get to them through the upset the rhythm front page.

So much on this week it is somehow wrong. No Age are playing with Times New Viking, Jay Reatard and Soiled Mattress tomorrow at Bardens and if you haven't got a ticket, then get one, as they are going stupidly quick (I never say this kind of shit because it is so naff and most promoters do it when they have sold precisely 8 tickets but this time I am serious and I don't want to be turning disappointed people away). TNV are playing the headline slot and NA are going to play later, FYI (enough acronyms already).

On Friday, UTR buddies EATS TAPES are playing at Bardens at Music Is My Boyfriend where I'm sure you will see some of us dancing around like total idiots, and before all that starts our friends Simon and Richard are doing this which you should check out yesss: 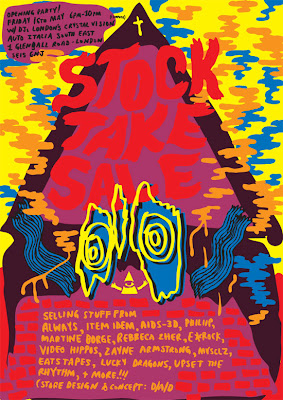 Also highly recommend is No Signal's weekend of Swedish experimental music, taking place at Cafe Oto and at the ICA on Friday, Saturday and Sunday (and a bargain it is too!). More info is on their website at www.no-signal.net.

Next week: two monster shows, Xiu Xiu on Monday and No Age on Wednesday. AND THE INDIANA JONES MOVIE (sad fact: I honestly thought the whole crystal skull thing was Tipton-inspired Dan Deacon related joke until I saw the film poster on a bus last week).

Thats all for tonight. I'm going to go and think about kittens playing with wool to calm down.
Or if I'm really lucky there'll be a programme about medieval England on the telly. Herds of dogmen! See you all soon, claire x
Posted by UPSET THE RHYTHM at 14:31 No comments:

Fuck you , London, for voting in Boris. All of us here at UTR towers are in a state of gloom. We love this city, but when things like this happen, you realise how alienated you are here. (Has anybody met anyone who has admtted to voting for Boris?)

Apologies for the lack of blog updates. We have been super-busy and our faces are wearing bleary eyes. There have been some incredible shows of late, Flower/Corsano Duo amongst the splendour of St Giles, Evangelista, Magik Markers and Old Time Relijun bringing the party, epic dancing to Yacht, an audience open mouthed at Health and last night's John Wiese/Talibam show rounding off the week nicely at Whitechapel Art Gallery. Thank you thanks you to everyone who played/came to the shows/helped/supported us in any way.

Continuing the gallery theme, Lucky Dragons, Helhesten and Pre are playing the ICA on Monday. Its part of a party to launch their 60th birthday season, everone's invited, its free, you can get in from around 7pm and music starts 8ish. The mighty Hooray for Sex DJs are bringing the jams. It is first come first served, so make sure you get there early.

Also, this afternoon (Saturday 3rd), John Wiese will be playing at our-favourite-record-store Second Layer, in Highgate, from 3pm. Highly recommended.

When we get some free time we'll upload lots of video and photos. But this is a Bank Holiday weekend and tomorrow means A DAY OFF. Yesssssss.

Be good x
Posted by UPSET THE RHYTHM at 03:03 No comments: