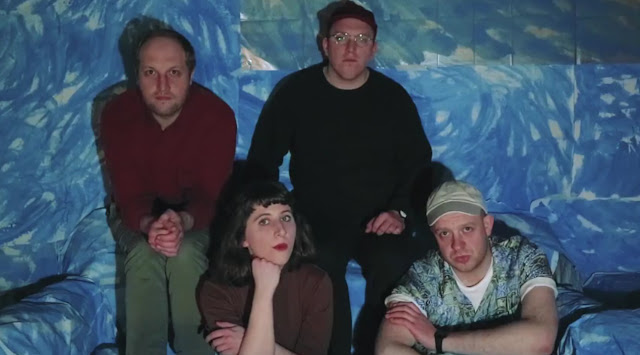 Posted by UPSET THE RHYTHM at 04:56 No comments: 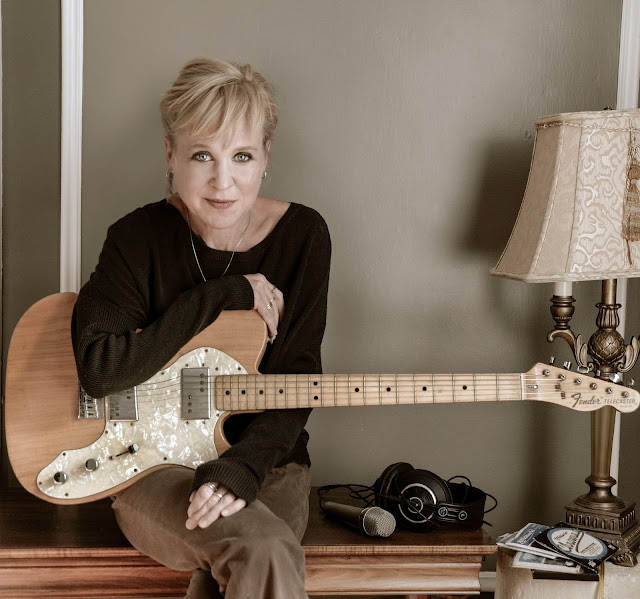 KRISTIN HERSH, most recognised as the front person for the influential art-punk band Throwing Muses and power trio 50FOOTWAVE, will kick off a short visit to the UK this summer with her sold-out performance at Robert Smith’s Meltdown Festival on June 21st, followed by this special solo date at Cecil Sharp House.

Throwing Muses first gained traction in the early ‘80s, playing with similarly singular artists, such as The Pixies and Dinosaur Jr. They continue to release groundbreaking music, most recently with 2013’s double CD masterpiece ‘Purgatory/Paradise’. Kristin’s solo career spun off in 1994 with the release of ‘Hips and Makers’, a widely acclaimed album that included ‘Your Ghost’, a duet with R.E.M.’s Michael Stipe. Since then, Kristin has released a steady stream of distinctly individual solo albums, including 2010’s ‘Crooked’, released as her first in the inventive book/CD format for which she is now known.

2016’s ‘Wyatt at the Coyote Palace’, on which Kristin played all of the instruments, received rave reviews; an explosive defined by blistering guitars, powerful drumming and her signature visceral vocal technique. Her poignant true stories bring the listener into what the BBC calls Hersh's "dark and dizzy world". In 2004, Kristin formed the noise rock power trio 50FOOTWAVE, releasing a series of frighteningly intense mini-albums, all available for download free of charge. Their most recent 'Bath White' EP was described as “a series of loud explosions, of velvet like dreams all intermingled at the same time. Bath White takes no prisoners.” Kristin’s writing career has flourished with the highly acclaimed ‘Paradoxical Undressing’ (released as ‘Rat Girl’ in the USA) and the award winning ‘Don’t Suck, Don’t Die’, a personal account of her long friendship with the late Vic Chesnutt, as well as the enchanting books which now accompany each of her record releases.
https://www.kristinhersh.com/

School Damage 7" announced, plus Dog Chocolate & our many early May London shows!

Hello there!
What a week of giant bumblebees in flight and baking sunshine, it feels like we’ve skipped spring and ended up slap in the middle of summer with bbq smoke in our hair.
Posted by UPSET THE RHYTHM at 10:28 No comments:

This is the new video from Dog Chocolate, it's called 'Tesco Flag' and is set in Epping Forest and features a lot of anti-Brexit rhetoric, beans and the band dressed up as headlice. A quasi-future-medieval look to their costume ties in with references made later in the song to the book Riddley Walker.

The lyrics deal with the knotty and unpleasant issue of English national identity. Filmed in the freezing cold, the band learned that dogs will eat beans straight out of liquid mud if they have to.

Dog Chocolate's new album 'Moody Balloon Baby' will be released on May 11th through Upset The Rhythm, the album is available to pre-order here now. 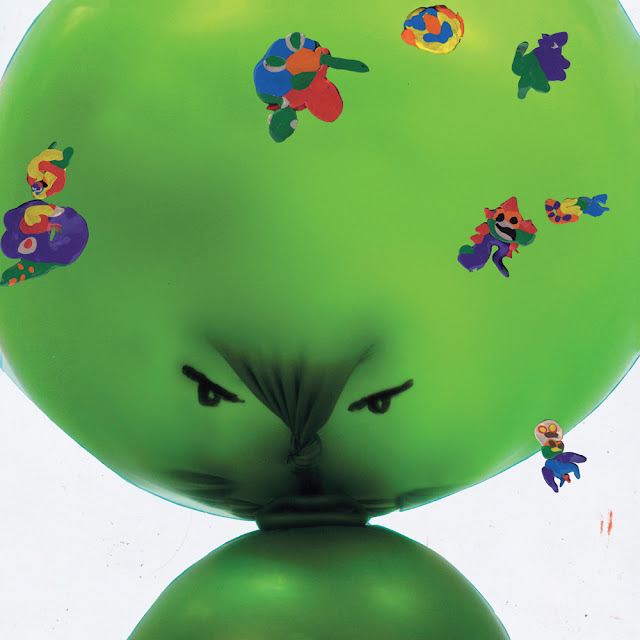 Posted by UPSET THE RHYTHM at 01:42 No comments:

Screaming Females heading back to London this September! 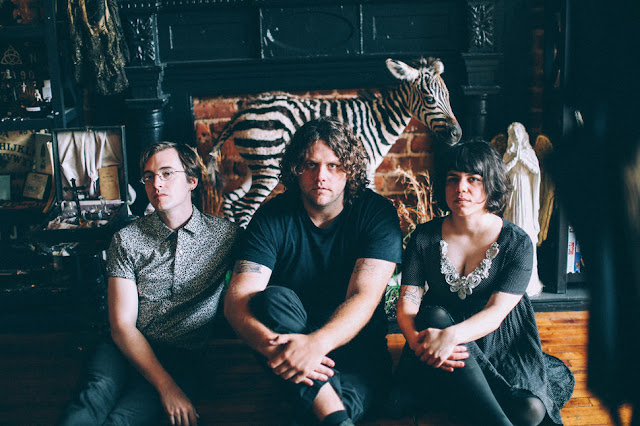 Very pleased to announce that Screaming Females will be playing London again this September. Tickets go onsale this Friday at 10am.

SCREAMING FEMALES are one of those force-of-nature bands that only comes around once in a blue moon. Their story starts in New Brunswick in 2005, with Marissa on guitar and vocals, Jarrett on drums and Michael on bass. 'Power Move' was the band's first full-length with any label (or any outside help) and was released by their hometown label, Don Giovanni Records, in 2008. They've gradually sneaked into a wider mainstream consciousness, gaining attention for their punk rock sensibilities and their raucous live shows driven by Marissa's famed guitar heroics. Now Screaming Females are DIY-punk luminaries, on the cusp of celebrating 13 years as a band by releasing this February's new album, entitled 'All At Once' on Don Giovanni Records. The band collaborated with producer Matt Bayles, setting out to make an album in the spirit of a salon-style gallery show, where larger pieces provide an eye-level focal point to a galaxy of smaller works. Concision took a back seat to experimentation, with arrangements meant to evoke the energy and spontaneity of their live performances. 'All At Once' is a reminder there's a hopeful and joyful energy to underground music-making. Patience, perseverance, and long term dedication still work.
http://screamingfemales.com/
Posted by UPSET THE RHYTHM at 03:07 No comments:

Posted by UPSET THE RHYTHM at 03:26 No comments: 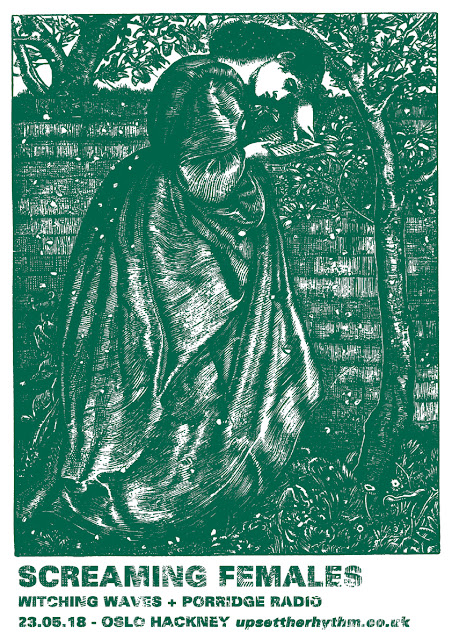 Only a handful of tickets left for our Screaming Females concert in London this May 23rd! Well worth buying in advance this week if you don't want to miss out on the show! It's going to be beyond, beyond great!

x
Posted by UPSET THE RHYTHM at 03:37 No comments: 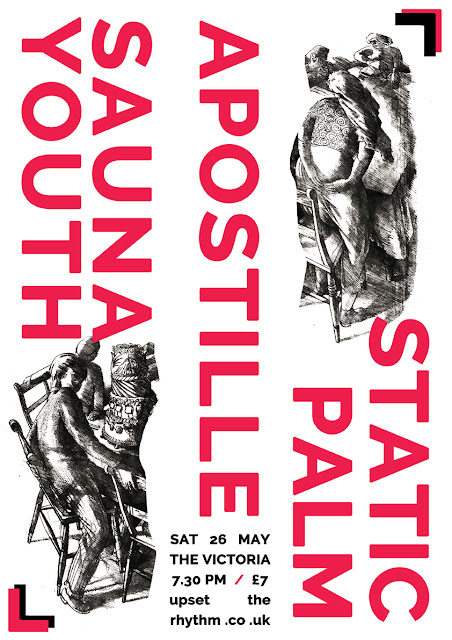 Here's a poster for next month's Apostille concert with Sauna Youth & Static Palm both playing too!

APOSTILLE is a man who’s torn through enough sound-systems to know the difference between gesture and meaning. Alongside running his own DIY record label, Glasgow native, Michael Kasparis has spent the last few years making forays into the realm of hardcore punk with his groups Anxiety and The Lowest Form. Throughout all this, his solo electronic venture, Apostille has continued to evolve with each twist and turn of the world. What started off as a quest to whip up a mood and force that into a song has steadily become more of a mission in communication. His audacious 2015 debut album ‘Powerless’  self-released through Night School set the template by hooking up his honest delivery to some manic expositions in electronic pop. At once minimal and courageous with intent to connect, Apostille songs race off with unchecked abandon, skittering drum machines, thick walls of sequenced synth and decidedly elastic basslines. ‘Choose Life’ (out June 8th on Upset The Rhythm) is both the album Apostille chose to make and had to make. He dialled down the clown, built up a new-found confidence in his voice and melody in general and began to feel more at home in the refuge of pop music (with a capital P). All the truest pop music speaks to us of escape and through this new album Apostille allows its transformative power to fully manifest. It’s an album full of life and energy, and like his live show as disobedient as it is heroic in its pursuit of liberation.
https://apostille.bandcamp.com/

SAUNA YOUTH are an evolving band of future humans making truly irregular punk, not quite comparable to anything else. "Weird" is a meaningless platitude and "art punk" is a classifier that shouldn't be required. Consisting of Boon (drums, vocals), Pines (guitar), Ecke (vocals, sampler) and Mince (bass), Sauna Youth are a punk band that's happy to embrace all of the contradictions that go along with that notion. On paper, Sauna Youth sound considered - live, they can barely be contained. They are at times furious, unstoppable and severe, with the sampler wailing like an alarm coming from a parallel universe - then chugging, poppy, harmonious and fun. Forever loud. 2015’s totemic ‘Distractions’ album (Upset The Rhythm) is a record that feels instinctive and natural, flowing freely from a band that have come to terms with the sum of its parts.
http://lostinidea.blogspot.co.uk/

STATIC PALM is the solo project of James Burgess, featuring his synth & drum-machine led brooding post-punk. Fans of John Maus, Total Control, Tuxedomoon and other practitioners of ice-cold musics will enjoy.
https://staticpalm.bandcamp.com/
Posted by UPSET THE RHYTHM at 08:41 No comments:

Hello there!
Thank you so much for coming out earlier this week to see No Age and Joshua Abrams both return to London, was brilliant to see so many of you!

Posted by UPSET THE RHYTHM at 01:28 No comments: 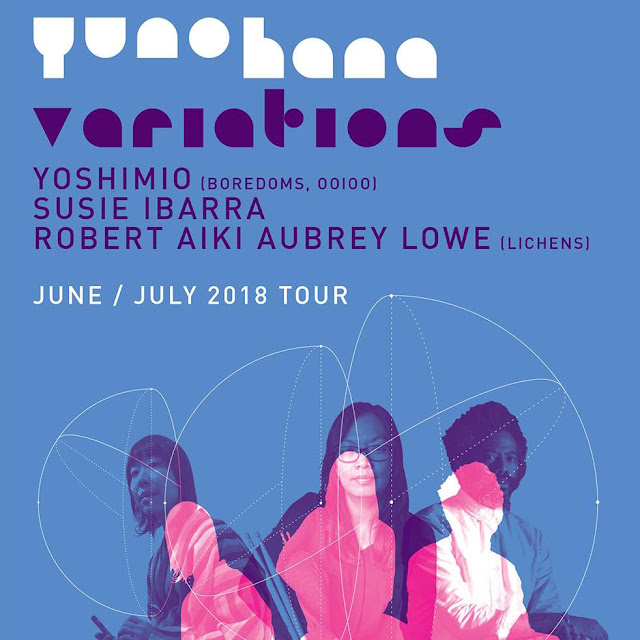 Three improvisational luminaries; multi-instrumentalist YoshimiO (Boredoms, OOIOO, SAICOBAB), avant-garde percussionist Susie Ibarra, and artist Robert Aiki Aubrey Lowe (Lichens) shall be performing together as Yunohana Variations for the first time in the UK. The trio's previous collaborations have resulted in album, ‘Flowers Of Sulphur’, released on Thrill Jockey this February. ‘Flower of Sulphur’, is a transfixing piece of continuous improvisational work which explores the direct relationship between the artists and their individual configurations. The album takes the form of the trio each playing their principal instruments to explore the space in that moment. This spontaneous composition showcases the freedom and musical immediacy of all three artists’ ability to interplay as well as their individual unique techniques to create engaging experimental sounds. This tour is the second installment of Outlands’ experimental tour outings, this time produced by Birmingham’s Supersonic Festival.

YoshimiO is a drummer, vocalist and founding member of the revolutionary Japanese noise rock group Boredoms. She is the leader of the experimental rock band OOIOO, a member of Free Kitten with Kim Gordon, and most recently the singer in SAICOBAB – a quartet who blend ancient Indian musical traditions and instruments with electronics and modern sounds. Known for her ability to improvise in a variety of contexts, YoshimiO has previously performed and recorded improvisational music with saxophonist Mats Gustafsson, Jim O’Rourke, and recently with Lowe, and then Ibarra during a series of collaborative performances in New York City, late in 2015.

Susie Ibarra, is one of the most significant percussionists and composers of our time, known for her work as a performer within contemporary, avant-garde, jazz, classical, and world music, and performs in the band Dreamtime Ensemble. Ibarra studied with jazz luminaries Earl Buster Smith (of Sun Ra Arkestra), Vernel Fournier and Milford Graves, and Philippine Kulintang gong-chime music with Danongan Kalanduyan. She has performed with the likes of: John Zorn, Dave Douglas, Yo La Tengo, Ikue Mori and recent works include a sound installation for Ai Weiwei.

Robert Aiki Aubrey Lowe is a multidisciplinary artist whose practice is strongly rooted in exploration of moments and the hypnagogic state. Movement and gesture play key factors within this process, and in the performance realm are focused on by voice and modular synthesizer. A fixture of Chicago’s experimental community throughout the 90s and early 2000s, Robert has also performed under the name Lichens, is a member of the legendary band Om, and has an impressive portfolio of collaborations, which extends to the film world with his score for pseudo-documentary A Spell To Ward Off The Darkness, directed by Ben Russell and Ben Rivers (which Robert also appears in).

https://thrilljockey.com/artists/yoshimio-susie-ibarra-robert-aiki-aubrey-lowe
Posted by UPSET THE RHYTHM at 04:15 No comments: 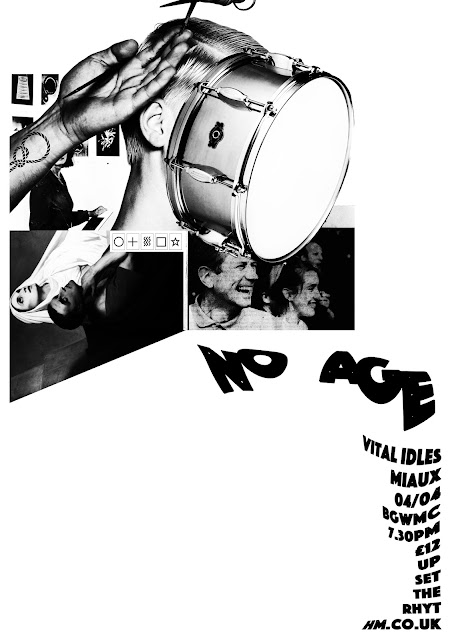 Hey there!
Here are the times for tomorrow’s sold out London show!

Thanks
x
Posted by UPSET THE RHYTHM at 06:26 No comments: