I'm Terry out today! Plus Lithics, Shannon And The Clams, Prolapse and Patsy London shows next week!

Posted by UPSET THE RHYTHM at 00:35 No comments: 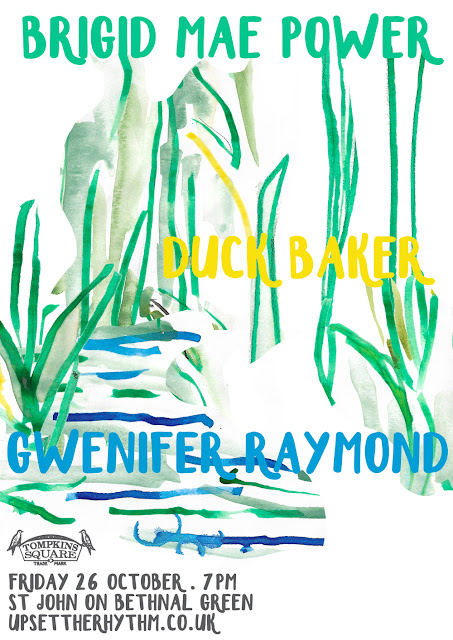 An evening in the harmonious fellowship of Tompkins Square Records featuring…

BRIGID MAE POWER is an Irish singer-songwriter and multi-instrumentalist who, like Judee Sill, Micky Newburyor Linda Perhacs before her, paints her songs in dreamily expansive strokes, transporting earthly compositions into universal and exultant realms. Her self-titled debut on Tompkins Square was a majestic suite of reverb-swathed laments for voice, guitar, piano, accordion, and harmonium, recorded at the Portland studio of key musical foil Peter Broderick. Themes include transformation, change, motherhood, acceptance, strength, courage and trust. In the words of Power, the album was about “trusting if you lose yourself or your way - you can come back”. New album ‘The Two Worlds’ is another masterful collection of effortless, affecting folk, and an album that furthers the songwriter and multi-instrumentalist’s already stellar reputation. Live, Brigid can encapsulate the timeless magic of her songs either solo or as a duo with Peter. Thus far she has toured throughout Ireland, UK and the US together with artists including Lee Ranaldo, Richard Dawson, Alasdair Roberts, Peter Broderick and Ryley Walker, with performances at Le Guess Who? and TUSK festivals along the way. This show follows on from Brigid’s jaw-dropping performance at Servant Jazz Quarters earlier this year.
http://brigidmaepower.com/

DUCK BAKER is one of the most highly regarded fingerstyle guitarists of his generation. His repertoire ranges from traditional Irish music through old-time mountain music and bluegrass to blues, gospel, and ragtime to swing and modern jazz, to free improvisation. Duck was born Richard R. Baker IV in 1949 and grew up in Richmond, Virginia. His teenage years were devoted to playing in rock and blues bands before becoming interested in fingerpicking blues and old-time country in local coffeehouses. By the time he moved to San Francisco in the early seventies, Duck was performing the wide range of material heard on his first record, ‘There’s Something for Everyone in America’ (Kicking Mule Records, 1976). In the late seventies, Baker recorded four more solo records, including the first ever solo guitar record of Irish and Scottish music. He also found time to participate with John Zorn, Eugene Chadbourne and others, in the “downtown” loft scene that was so important to the course of avant-garde music. Many of Duck’s recordings since 1980 have focused on his own compositions, but he also made recordings of blues and gospel material, a collection of early European Christmas carols and another devoted to Irish and Scottish tunes. His most ambitious record, ’Spinning Song’, got rave reviews in Jazz Times, Cadence, Coda, and the New York Times, and helped establish Baker as an important voice in the world of fingerstyle jazz guitar. Tompkins Square recently issued an album of Duck’s demos and outtakes between 73-79 entitled ‘Les Blues Du Richmond’.
http://duckbaker.com/

GWENIFER RAYMOND is a Welsh multi-instrumentalist, originally from Cardiff but now residing in Brighton, England. Gwenifer began playing guitar at the age of eight shortly after having been first exposed to punk and grunge. After years of playing around the Welsh valleys in various punk outfits she began listening more to pre-war blues musicians as well as Appalachian folk players, eventually leading into the guitar players of the American Primitive genre. She has since been playing her own moody and often-times manic original American Primitive styled compositions on guitar and banjo around the UK. In 2017 Gwenifer signed to the esteemed label Tompkins Square, who released her first single ‘Sometimes There’s Blood’ in October of that year.  Her debut album ‘You Never Were Much of a Dancer’ came out at the end of June to much critical praise.
https://gweniferraymond.com/

Posted by UPSET THE RHYTHM at 07:37 No comments: 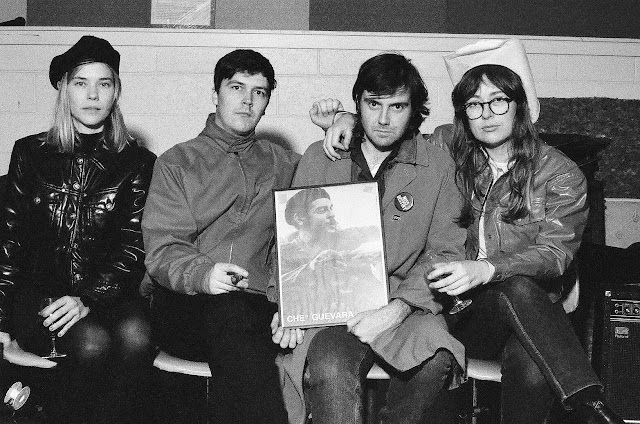 Brand new TERRY track 'Oh Helen' up on Brooklyn Vegan today! Get down to Bill's Indie Basement, it's the only place to hang out, A Certain Ratio and The Beths down there too!

http://www.brooklynvegan.com/the-beths-a-certain-ratio-wimps-terry-purrs/
Posted by UPSET THE RHYTHM at 13:06 No comments: