Morning all!
Today we’re so excited to have Deerhoof finally make their return visit to Upset The Rhythm for Oval Space’s sold out show. It’s taken 11 years since our very first show with the band and several hundred shows have fallen in between but that only makes it the more tantalising. We were lucky enough to host them last weekend at a show we put on in Belgium and they were nothing short of très fantastique! As mentioned, tonight is sold out, but we will have them come back over in August so don’t fret if you missed out on tickets. Here are the times for this evening’s performances too (come early!), doors from 7pm…

In other news we’re ecstatic to announce this week that we’ll be working with SAUNA YOUTH on their colossal new album entitled ‘Distractions’, out June 8th! The Quietus are presently hosting new track ‘Transmitters’ from the album too if you’d like to listen right away!

Our webshop (http://upsettherhythm.bigcartel.com/) is open for pre-orders now, alongside another addition in the shape of a new Upset The Rhythm T-shirt designed by Arrington De Dionyso, very nice! Talking of Arrington, his best friends from Olympia, VEXX have also just confirmed their debut European show with us too, the full listing follows, but conjure the earliest date in July in your mind and you won’t go wrong either! I’ll leave you with our write up for our concert next month for MADALYN MERKEY, MEDDICINE and RATTLE, one for your diaries, to be sure! 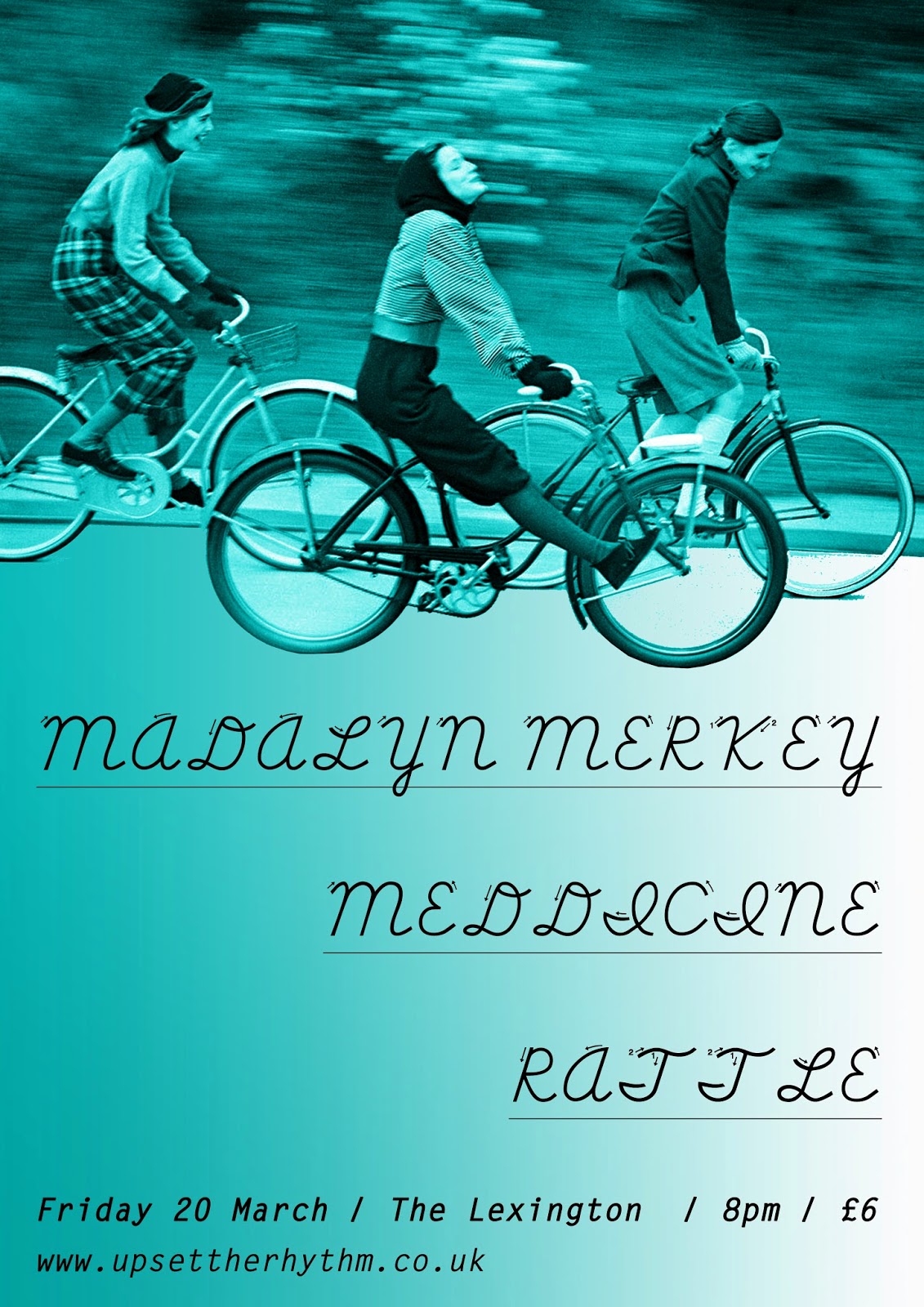 MADALYN MERKEY
MEDDICINE
RATTLE
Friday 20 March
The Lexington, 96-98 Pentonville Rd, Angel, N1 9JB
8pm | £6 | http://www.wegottickets.com/event/308428
MADALYN MERKEY makes spellbinding ambient/electro-acoustic music, flooded with exotic alien tones. As a student of the famous Mills College it’s understandable that her work is rooted in academic process and research, yet her new album ’Valley Girl’ (released on ‘New Images’) is also inspired by the agriculture and rolling landscapes of Madalyn’s native California. Using computer generated tones and sequences, she spreads out a unique topography of phase-modulated triangle waveforms and sine tones serrated into small atolls or peaks and interspersed with human traces of her processed, siren-like vocals redolent of some vintage Hawaiian exotica. The result is a minimal but super rich and vibrant sound field, one constantly in motion and quivering with lush harmonics that keep the ear tracing its ambisonic trajectories. In other words, it's hugely recommended for drifting off, far and away.
https://soundcloud.com/cyndi

MEDDICINE aka Monika Krol is a post-punk synthesist who plays fractured noise pop over a backing track of industrial soundscapes. With jackhammer drum machine patterns nailing down synth blasts that alternate between pulsing, menacing to full-blown white noise, Meddicine is a one-woman sound howl conjuring up Suicide or even TG. Clattering and oscillating her way through old sounds and new, Meddicine produces some of the darkest, most-damaged and affecting analogue electronic music you are likely to hear on this planet or any other.
http://meddicine.net/

RATTLE are a drumming duo based in Nottingham and comprised of Theresa J Wrigley and Katharine Eira Brown. Both musicians also play drums for two other well respected bands, with Theresa in Fists and Katy in Kogumaza. Far from the hippy bongo nightmare one might imagine from a band made up of only two drummers, Rattle instead play minimalist rhythms that remain both hypnotic and danceable heavily thanks to the delicate vocal melodies which accompany their beats. Their sound recalls This Heat or ESG whilst remaining uniquely their own.
http://rattleon.bandcamp.com/

Thanks so much for reading this!
See you later
UTR
x 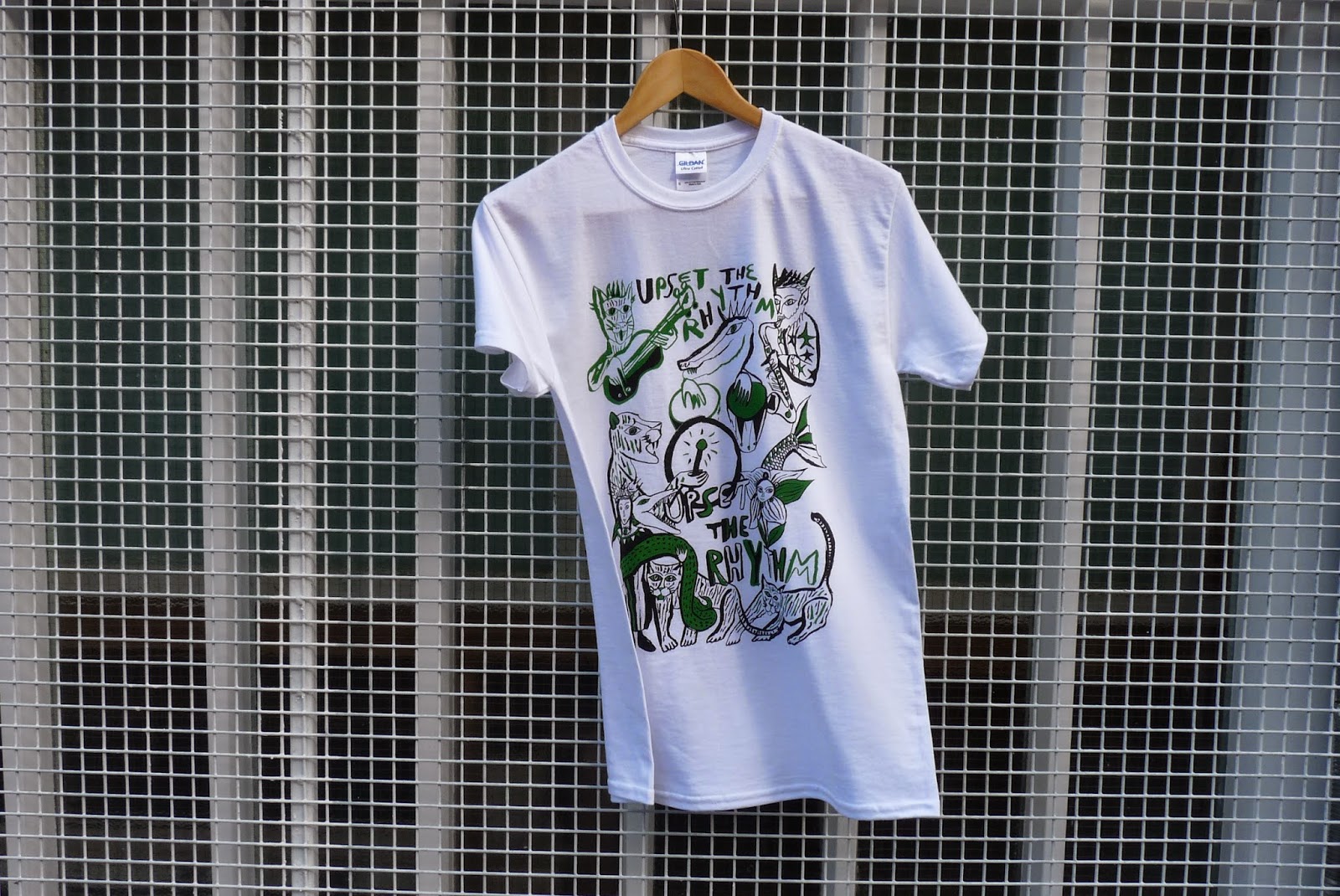 Designed by Arrington De Dionyso, printed by The Positive Press onto Gildan Ultra-Cotton shirts.
AVAILABLE now from our webshop! 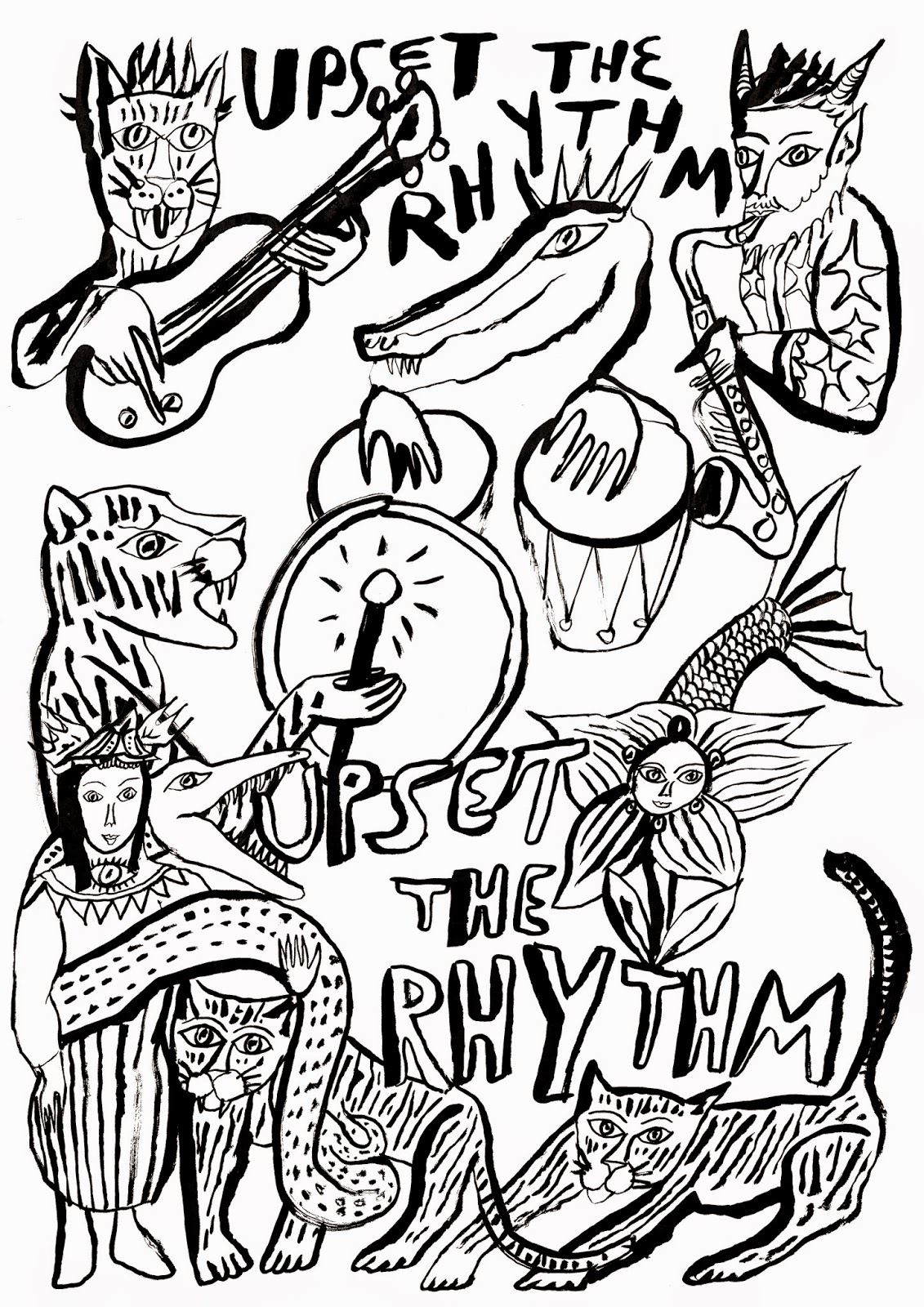 Posted by UPSET THE RHYTHM at 06:17 No comments:

The Quietus just announced our forthcoming album by Sauna Youth! 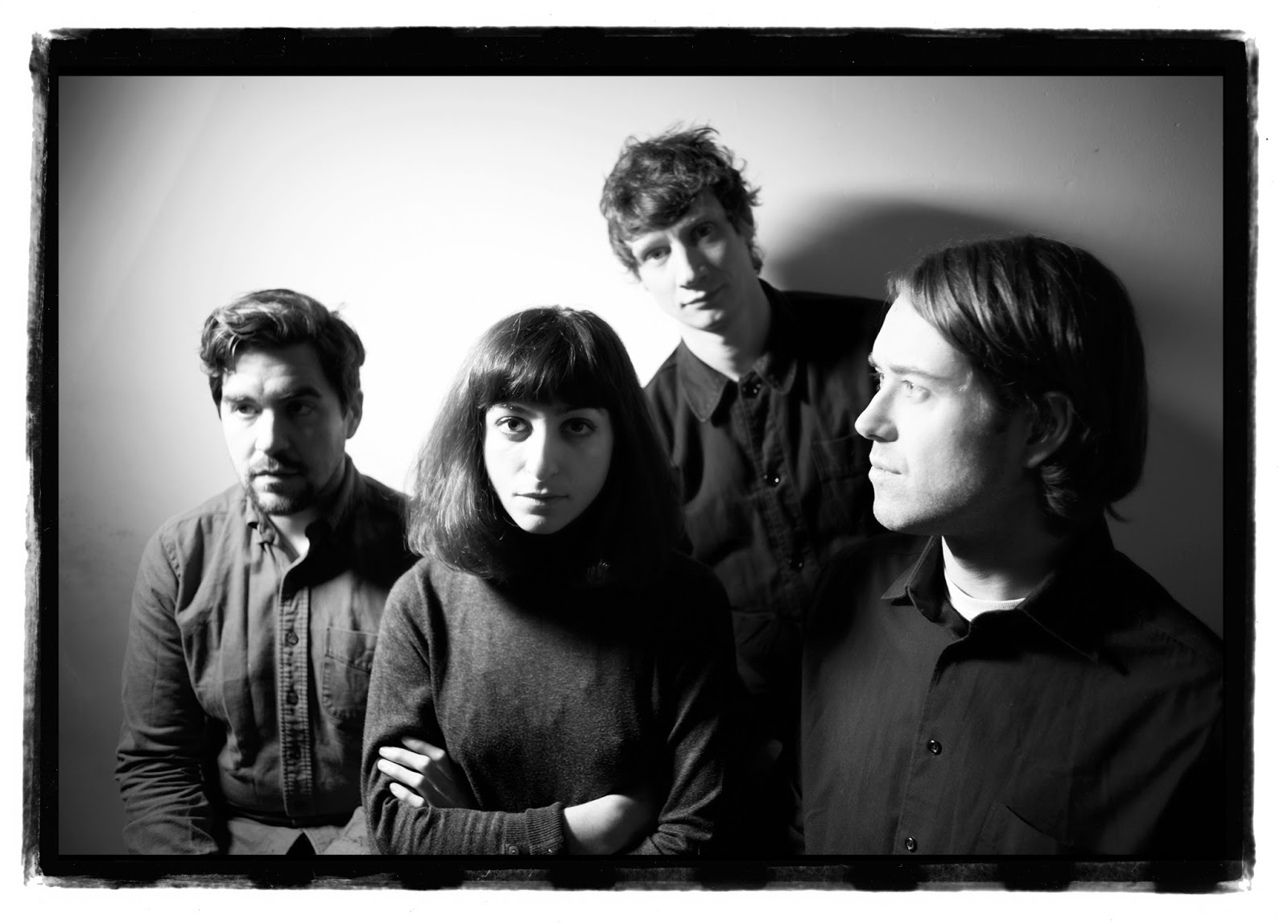 Yes, June 8th sees Upset The Rhythm release Sauna Youth's new album 'Distractions'! You can read more about that and check out colossal new song 'Transmitters' over at The Quietus now. Here's the album art and tracklisting too! 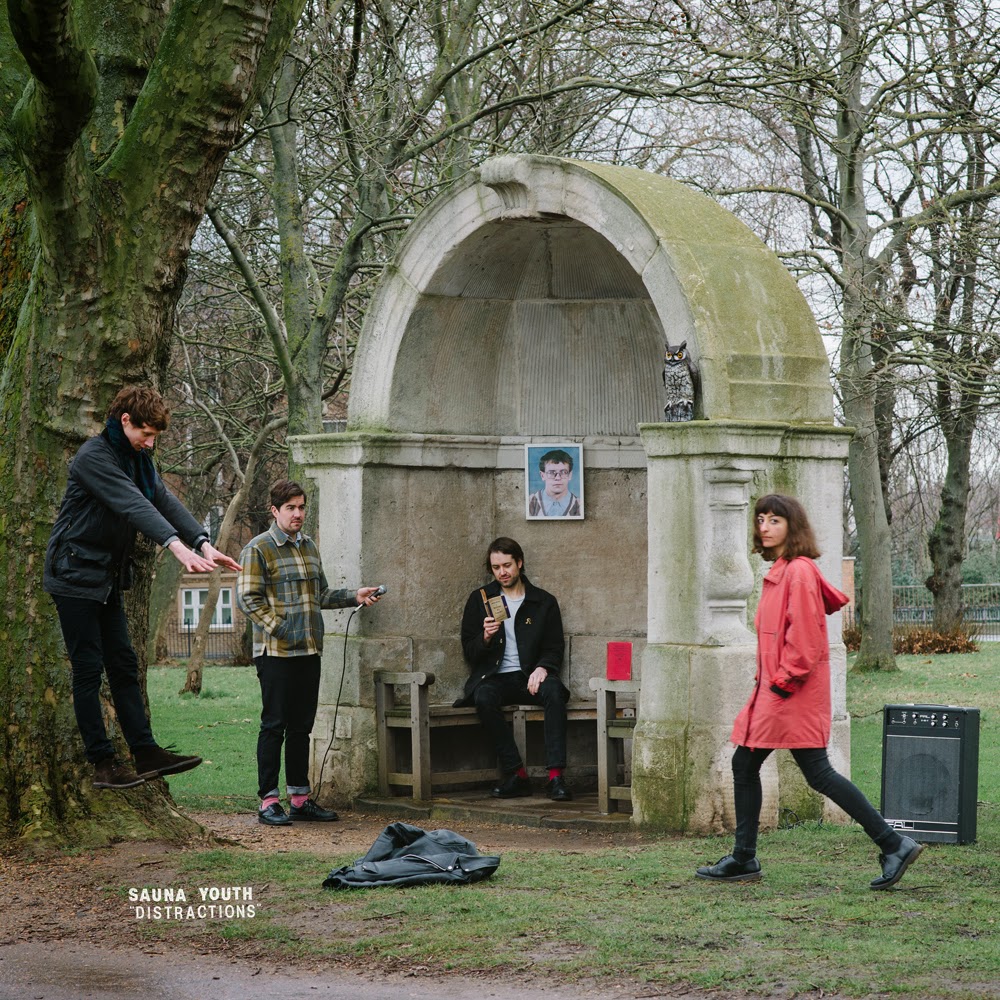 Hey there!
Just a quick reminder that we have elasticated noise punks DOPE BODY in town tonight at the Montague Arms with some terrific supports too, including WALKER / MELCHIOR, BLACK FUNGUS and LOWER SLAUGHTER! Tickets are £6 and will be available on the door from 7.30pm, here’s the set times too:

Read on for more specifics and a new show listing for LITURGY in June too!

DOPE BODY are a primordial, psych-addled noise rock beast from Baltimore! Born in 2008 out of the dance-friendly confines of the city’s Wham City scene, this unclassifiable, heavy group ventured out into the night to find more like-minds, and came back boasting a spasm of styles and directions. Evolving from blasting three-piece to blistering four-piece, Dope Body enjoy writing their own songs, touring endlessly and pummeling basement parties with a gleeful, wide-eyed fanaticism that the more reasonable among us might mistake for insanity (it ain’t entirely so). Dope Body writhe under their own experiments, swinging from gutterish sludge-punk to snake charmer-on-fire within the confines of a single tune. Rather than comparing their ferocity to other contender, just know that Dope Body is punk spelled upside-down and standing on its hands. 2012 saw their stunning album 'Natural History' come out on Drag City. Now, two years later, the Baltimore quartet have returned with new album ‘Lifer’, which sees Dope Body taking a departure from their past releases. Their raw, off-kilter virility still makes for a ferocious record. Yet gone are the frenetic guitar melodies, being replaced with full-frontal riffing that dynamically ebbs and flows. ‘Lifer’ is the elder statesman of Dope Body's output thus far, calling for greater structure and direction without losing any of its rough intensity. If anything, they have revved up their raucous energy, with the heavy moments being relentlessly driving, a weighty Cadillac hurtling forward across a fractured tarmac. There is greater focus on progression, building the songs into the bludgeoning thrash they inevitably become.
http://dopebody.tumblr.com/

WALKER / MELCHIOR is a collaboration between two largely prolific artists, Dan Melchior (Dan Melchior und Das Menace, Lloyd Pack) and Russell Walker (The Pheromoans, Bomber Jackets, Lloyd Pack). The duo’s sound occupies the groggy morning hours that bleed into the bright sun, as heard on their recent 7” for Kill Shaman. ‘Sad Son In-Law’ unfolds with a juxtaposing mix of buzzing sounds and glowing synths, progressively detailed by a string of jewel-toned guitar quests. Snaps, pops and perhaps even a harmonica begin to emerge in the sun-filled loop, guiding Walker’s sung-spoken-word vocals with a wonky bass line. ‘I Could Sit Here Forever’ comes off damaged and broken with unpredictable guitar noodling and beams of synth, before blossoming into something exceptionally gospel-like and inside one’s head. A debut album is expected soon!
https://soundcloud.com/kill-shaman-records/melchiorwalker-sad-son-in-law-melchiorwalker-7

BLACK FUNGUS have released a tape on Milk Records and already have another set of recordings in the works. This three piece feature members of Witching Waves and Gloss Rejection, who work up an impressive mix of hook laden song craft and discordant imbalance. Elements abound of the DIY American noise rock hay day combined with Gordons-esque post-punk.
https://soundcloud.com/blackfungus

Thank you for reading and for all of you who came out to see Richard Dawson last week and Dan Deacon yesterday, two jaw drop performances that’s for sure! Can’t wait for later, see you then!
UPSET THE RHYTHM
x

Posted by UPSET THE RHYTHM at 01:54 No comments: 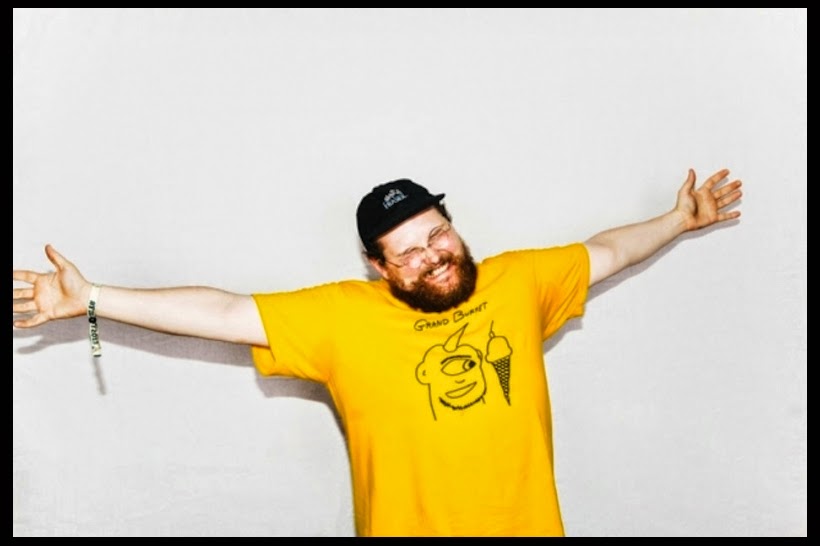 Posted by UPSET THE RHYTHM at 23:42 No comments:

What an astounding performance from Richard Dawson last night, next level brilliant!

Posted by UPSET THE RHYTHM at 00:52 No comments: 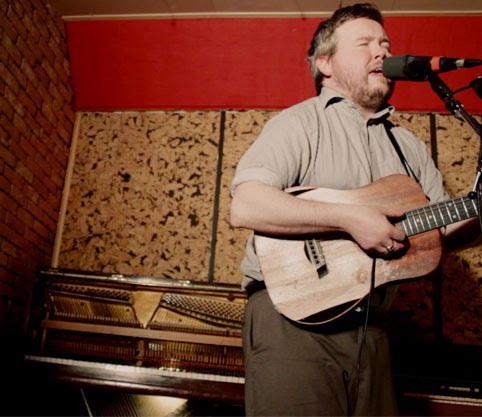 Times for tonight's sold out Richard Dawson show at The Lexington, see you later!

Dan Deacon and Dope Body in London next week!