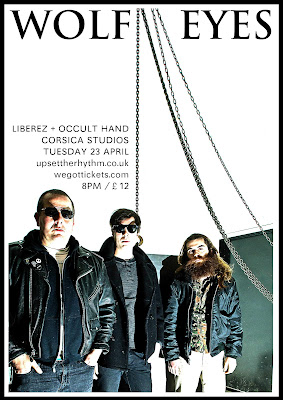 Good afternoon!
Still reeling from last night's incredible NOBUNNY show, what an a-mazing performance! Also huge thank yous to you all for helping sell out our SUN ARAW and JESSICA BAILIFF shows last week too! Our next event, is our 493rd since we started Upset The Rhythm (yes we have actually counted them all and yes not long now to number 500!), and sees WOLF EYES make an exclusive stop off in the UK to play for us at Corsica Studios tomorrow alongside LIBEREZ and OCCULT HAND. It's going to be truly brilliant, loads more details follow on plus new listings for of a show we've planned with LUCKY DRAGONS and MARY OCHER and a tiny intimate chapel show for DANIEL HIGGS next month too…

WOLF EYES' infamous blistering noise propelled them from being a dank Ann Arbour, Michigan basement sensation to the finest ranks of Sub Pop without ever losing a shred of credibility. From touring with Sonic Youth and Andrew W.K., Wolf Eyes have crossed  borders into popularity which few other such confrontational units of their ilk have been able to and kept straight and narrow on their blazing path. Originally started as the solo project of former Nautical Almanac member Nate Young, he was soon joined by  Aaron Dilloway in 1998, John Olson in 2000 then Mike Connelly and now Crazy Jim. They has released over 150 recordings in their relatively short lifespan, on labels such as Bulb Records, Troubleman Unlimited, Fusetron, and Sub Pop, as well as on Olson’s American Tapes label, Dilloway’s Hanson Records, Mike Connelly’s Gods of Tundra label and Nate Young’s AA Records. This show sees WOLF EYES play a one off UK show in support of their incredible new album 'No Answer: Lower Floors' out this month on De Stijl Records and as anyone whose seen them play live can attest the overwhelming force of a Wolf Eyes performance must be seen/felt/heard to to be believed.
http://www.wolfeyes.net/

LIBEREZ is the latest incarnation of a long running music collaboration between John Hannon and Pete Wilkins. Their album 'The Letter' was released last year via Alter Records and features multi-instrumentalist Tom James Scott and vocalist Nina Bosnic as new members. Repetitve dual vocal patterns are augmented with amplified percussion, light rhythms, guitar and violin dissonance to create a sense of abstracted ritual which can't help but draw listeners into the labyrinth. A new LP lurching around Britain's industrial past called 'Sane Men Surround' is out now on Savoury Days.
http://www.liberez.moonfruit.com/

OCCULT HAND are a mysterious pairing from Brighton, Isa Brooks and Henry Holmes. Their music is an eerie blur of sinister static, tremulous organ, punctuated by found sounds and effected voice, that builds to ghastly peaks before dispersing with a chilling lack of fanfare. Look out for a tape on SixSixSixties soon!
https://soundcloud.com/occult-hand


Thank you for reading!
See you tomorrow.
UTR
x

Posted by UPSET THE RHYTHM at 07:07 No comments:

JESSICA BAILIFF and SUN ARAW and NOBUNNY next week in London! 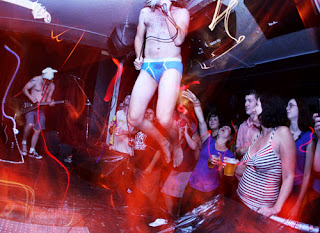 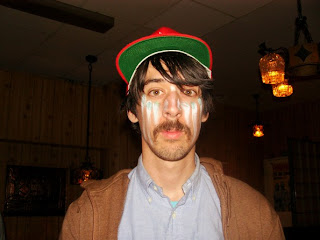 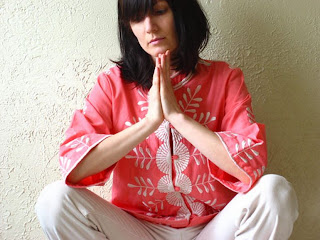 Hello again!
Not one, not two but three shows for you next week, here's a quick heads up! On Wednesday we're at Cafe Oto for JESSICA BAILIFF's debut UK show, well worth the wait I'm sure and backed by an eerie incarnation of BODUF SONGS and MATAWAN too. Then on Thursday we're at Corsica Studios for a night of heavy hypnotics courtesy of SUN ARAW, DEEP MAGIC, VISION FORTUNE and BASS CLEF (DJ Set), nothing short of sublime. Then Sunday brings the week to a close in duly chaotic style with an epic party with NOBUNNY at the Brixton Windmill. It's gonna be great, here's all the detail…

JESSICA BAILIFF is a singer-songwriter from Toledo, Ohio. From her first records in the last gasp of the 1990s, Bailiff has carved out her own spectral path. She's collaborated with Dave Pearce of Flying Saucer Attack, Odd Nosdam, Casino Versus Japan and Rivulets among many, giving you some idea to expect the unexpected as her music ranges from short piano pieces to slowly ascending 20-minute feedback driven monsters. Brand new album, 'At The Down-Turned Jagged Rim Of The Sky' released by long-term label Kranky, is her first since 2006, suffused with her cool, half-chanted singing, plenty of sonic murk and a clear focus on arrangement and precision. Opener, 'Your Ghost Is Not Enough' is a strong meditation on the tensions and feelings of long-distance relationships, and two songs later, 'Sanguine' revolves around an epic blush of organ, bass, and increasingly louder guitars. The latter brings to mind the Doors fronted by Trish Keenan at first, but it transforms into something that's all Bailiff by the end. And then 'If You Say It' takes it to a further level with what could be gentle flutes bubbling through the mix. Bringing scope and space to a more intimate level, the miniature epic 'This is Real' demonstrates the virtues of the slow build and Bailiff's careful placement: repeated keyboard parts are matched by guitars, then voices take the place of the guitars as new guitars are added into the background. It feels like sweeping exultance, a sigh, and the title's reach for something grounded. For this show, Jessica will be performing with a band, consisting of Mat Sweet of Boduf Songs on drums and Clive Henry on bass, this will be her first ever show in the UK, seriously exciting!
http://jessicabailiff.tumblr.com/

BODUF SONGS has evolved from Mat Sweet's minimalist acoustic approach, showcased so well on previous albums for the Kranky, to a more adventurous and experimental treatment of his songs. Dark psychedelics are crafted from a combination of raw electronics, manipulated samples and heavy guitar. Where once other instruments were rare interludes betwixt brooding vocals and carefully plucked guitar, now they have a much bigger part to play, shaping entire songs into an animated whole. New album, 'Burnt Up On Re-Entry', released on Southern Records, is very much another galaxy for Boduf Songs, allowing Sweet to explore new black holes and interstellar clouds, resulting in expanding sounds that interact powerfully with his finely honed songwriting, and presenting a new hypothesis of the universe.
http://www.bodufsongs.com/

MATAWAN focus heavily on textural relationships, seeking to portray an aural journey that often treads a fine line between brooding density and compelling melody. Specifically choosing to use electric guitars as their primary medium, the band's compositions vary organically with each performance, which helps to give Matawan their own sense of freedom.
https://soundcloud.com/matawanmusic

SUN ARAW aka Cameron Stallones has over multiple cassette releases, three EPs, six albums and some arresting visual work, evolved as a singular purveyor of low-end psychedelia, melted afrobeat and warped dub. This month Stallones will bring his music to scorched and transcendental plains in the live setting. After the empire-like sonic scope of last year’s 'Ancient Romans' LP, 2012 saw Sun Araw ascend yet further with the release of 'ICON GIVE THANK', an incredible collaborative album between Cameron, long term collaborator M. Geddes Gengras and roots reggae vocal legends The Congos via the RVNG label as part of their FRKWYS series. This Summer will see the release of a brand new Sun Araw album, 'The Inner Treaty', so expect plenty of new songs from that on this April tour as Cameron continues his prolific and idiosyncratic artistic ventures: producing visually arresting videos for some of his totemic tracks, producing and DJing killer outsider dub/dancehall as Duppy Gun Soundsystem (also with M.Geddes Gengras) and emitting countless DJ mixes, rerubs, unofficial edits and spontaneous jams. It's going to get hazy that's for sure!
http://www.sunaraw.com/

DEEP MAGIC is the solo project of LA's Alex Gray. Utilizing found sound, minimal but twitchy rhythms and a whole mixed bag of production tricks, DEEP MAGIC speeds things up a bit and throws some light industrial and house curveballs to make for a bizarre and rewarding listen. Deep Magic is an ascent of vibrating dreams, a reverence for the past and narrative bliss. Deep Magic is archaic spirit hymns, total, healing music.
http://deeptapes.com/

VISION FORTUNE are brothers Alexander and Austin Peru who first met Andres Cuatroquesos in a small boys boarding school in Menen, Belgium. They rekindled their friendship in London seven years ago, and proceeded to meet up every week at an after-college music club perfecting a rhythmic tension and phasing repetition between guitars and drums that's plunges their epic, mesmeric songs into transcendental territories. Their debut LP, 'Mas Fiestas con el Grupo Vision Fortune', is out 13 May 2013 and is a split release between Faux Discx and Gringo Records, a duo of labels that has been behind previous releases from like-minded artists such as Cold Pumas, Sauna Youth and Hookworms.
https://soundcloud.com/visionfortune

BASS CLEF is rooted in London and has a very distinct but ever-morphing sound of deep modular zonage, delving into the deliriously trippy yet also moving onwards and rave-wards. For this show Ralph Cumbers will be working on a special DJ set of dubbed-out mixes, flying the afro-disco flag via the world of deliciously un-smooth groove.
http://www.myspace.com/bassclefbass

NOBUNNY (one word, all caps) has been captivating audiences of dedicated fans and new believers since Easter 2001 (the day Joey Ramone died). Born in the desert outside of Tucson AZ, NOBUNNY started as an animal Elvis impersonator before deciding to try out his hand at songwriting. The raucous rabbit's music is a intoxicating concoction of all the rights and wrongs that make up the heart and the soul of real rock n roll. Songs that sound as though they were written at the Brill building by a punk rock mutant back from the future. Some batshit brilliant bullshit. NOBUNNY stayed deep underground for his first 6 years doing DIY solo tours, burning limited CDRs, and building a dedicated group of fans across the USA. NOBUNNY shows were purported to include a dizzying act that often featured nudity, dancing, chaos, and costumes (most notably NOBUNNY's filthy rabbit mask). 2008, saw his first LP titled "Love Visions" released on 1234GO! Records. The album was a hit among critics, punks, and nerds alike. A modern RNR classic filled with inept production, and songs as catchy as catchy. In 2009 Burger Records released the Mixtape/LP "Raw Romance". An acoustical confessional brainstorm exploration of cassette goodness . In 2010 the rascally rabbit released a "warts n all" Live Album on Jack White's Third Man Records. The year ended with Nobunny's 2nd proper LP, "FIRST BLOOD". Released on the Memphis' Goner Records, the album is NOBUNNY's off the deep end, poptastic, psych-o masterstroke. NOBUNNY loves you, and has made it damn near impossible not to love him back. Follow the white rabbit!
http://www.facebook.com/THENOBUNNY

ATOMIC SUPLEX are a London four piece of helmet-toting garage rockers with an album 'Bathroom Party' out now on the legendary Crypt label. This is probably what Bill Haley sounds like if you have the worst tinnitus in the world. Not so much a sonic cathedral as a sonic corrugated iron shed.
http://www.atomicsuplex.co.uk/

MEAN BIKINI are a garage/new wave quartet also from the Capital. Both the energy and attitude of their songs are dipped in total punk gloop. This band of young women sound like a Japanese power-pop group like Thee 50s High Teens, only raked through the hiss, making for some raw demos, leading us onwards.
http://meanbikini.bandcamp.com/

CANDY HIGHWAY are purveyors of only the finest anti-post postmodern punk!
https://www.facebook.com/pages/Candy-Highway/447406985309890


Thanks for reading and for coming to so many of our shows recently!
Have the best weekend and we'll see you next week!
UPSET THE RHYTHM
x

Posted by UPSET THE RHYTHM at 03:31 No comments: 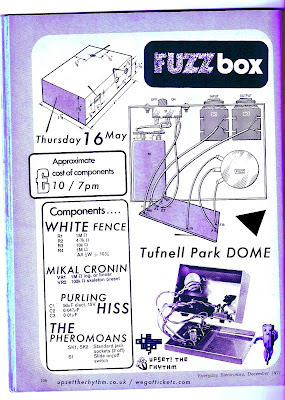 Posted by UPSET THE RHYTHM at 03:15 No comments: