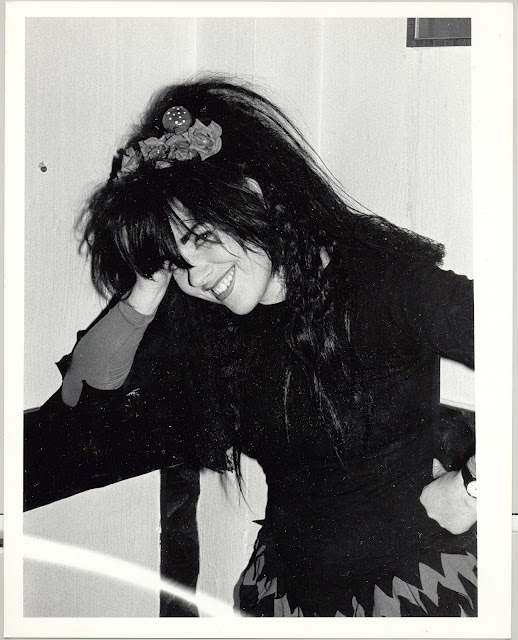 ROSE MCDOWALL’s trajectory from punk provocateur to chart-subverting pop star to underground neo-folk musician has been one peppered with unknowns and adventure. McDowall began her career in her hometown of Glasgow, operating within the nascent punk scene with her first group The Poems. After a meteoric rise to pop stardom with Strawberry Switchblade (along with friend Jill Bryson), McDowall submerged herself in the post-industrial landscape, becoming a member of Current 93 during their purple patch and a guest on records by artists as diverse as Psychic TV, Felt, Coil and Nurse with Wound, McDowall’s status as the unofficial queen and muse of the underground is well deserved. After the recording of several demos which resulted in the ‘Cut With The Cake Knife’ album (Night School/Sacred Bones, 2015), McDowall formed Sorrow to further explore her interest in psychedelic, folk music. Considerably darker in tone than Strawberry Switchblade, but still resplendent in McDowall’s angelic, heartfelt vocal, ‘Under the Yew Possessed’ is a cult album that belies a classic pop song writing sensibility. Issued in a limited gold vinyl edition for Record Store Day 2018, ‘Under the Yew Possessed’ enjoys a full Night School reissue later this summer, followed swiftly by ‘Gem’( in October) a new album of recordings with Canadian musician Shawn Pinchbeck. This Oct 1st concert will be a rare performance from Rose with her new live band, comprising of several members of Scotland’s ever burgeoning music scene featuring Russel Burn ex of Fire Engines/WIN/Spectorbullets and Jeremy Thoms ex-Revillos/Strawberry Tarts and currently The Cathode Ray amongst them.

Posted by UPSET THE RHYTHM at 07:15 No comments: 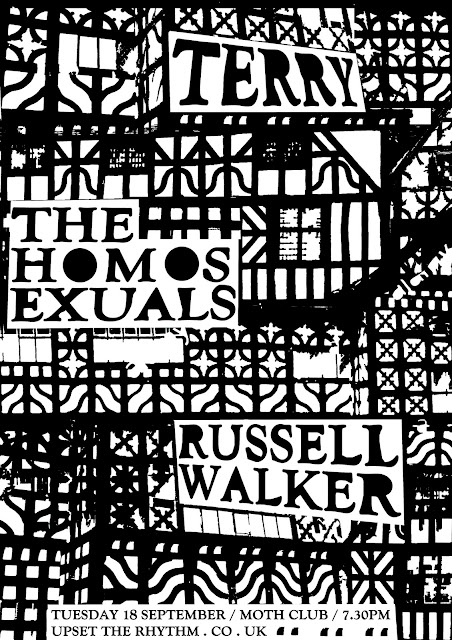 TERRY is getting ready, combing his hair, buttoning his jacket, turning the key in the door. "I'm doing fine," sings Terry out loud, he knows. Divide him into four and you get Al Montfort (UV Race, Total Control, Dick Diver etc.), Amy Hill (Constant Mongrel, Primo, School Of Radiant Living), Xanthe Waite (Primo, Mick Harvey Band) and Zephyr Pavey (Eastlink, Total Control, Russell Street Bombings). Inevitably, Terry likes to make a noise. Drums, guitars and all his voices come into play, making a solid raft for Terry's inner musings to navigate the languid rapids. This all unravels at its own pace, sometimes drifting into glam punk and country backwaters, always conducting a conversation with the commonplace. Terry also make us a bit queasy at times, singing about police beatings and nationalism and all that. But they’re not out to hurt you. They’re like the kindly bearer of bad news. There’s some awful stuff going on around the world. Terry puts it in terms that speak to all. It’s a tragicomedy. I’m pretty certain Terry isn’t perverse, they’re just the harbinger of the encroaching perverse world. I’m pretty certain Terry wants to be my friend, and your friend. Our friend, Terry. ‘I’m Terry’, the band’s third album in three years, is out this summer through Upset The Rhythm.
https://terryhq.bandcamp.com/

THE HOMOSEXUALS are the inspired focus of Bruno Wizard! Bruno Wizard is an underground music luminary, an iconoclast, an evangelist for DIY practice, who formed The Homosexuals out of the ashes of The Rejects in 1976. The Homosexuals were a strange prospect. Seemingly, their music should fit into a similar spot as that of angry young men like Wire and Magazine who carried their penchants for art-school angst in the midst of proto-thug posturing, like badges of authentic alienation. And of course, in many ways, these bands were alienated at least from what had been passing for British rock prior to 1976. However, L'Voag (aka Jim, Amos, and now, Xentos), Anton (aka George Harassment) and Bruno were also part of a different scene, where more "progressive" notions of artistic protest were at stake: This Heat, Family Fodder and Chris Cutler's bands Henry Cow and the Art Bears were some of the names going at it in these circles. Their music was a sprawling bag of angular power-pop, quasi-dub, garage-punk and other stuff I'd liken to Faust or some such lunatic mob. Releasing a few 7”s, a tape and a posthumous LP by 1984, the band then called it a day. Bruno continues though, having reformed the band since 2003 with a variety of new lineups. 2016 saw The Homosexuals release their ‘Important If True’ record collecting new and unreleased recordings from the band committed to tape in NYC. Bruno also starred in ‘The Heart Of Bruno Wizard’ documentary about his creative life that premiered at Cannes in 2014.
https://thehomosexuals.bandcamp.com/

RUSSELL WALKER, known as the uncanny lyricist/vocalist for The Pheromoans, Bomber Jackets etc, treats us to an exceedingly rare solo live appearance. Walker released his solo album proper in 2016 through Vitrine, contributed to a recent compilation on Kye and has a spoken album due out on Chocolate Monk soon called ‘Half Time 1916’.  Walker also published his latest book ‘When New Towns Act Tough’ in 2016, well worth tracking down on Larching Books!
https://www.youtube.com/watch?v=ZnVtAsspaKM

Posted by UPSET THE RHYTHM at 06:11 No comments:

The first track from Sauna Youth's forthcoming album 'Deaths' just premiered on DIY!
Check out 'Percentages' now, turn it up!

x
Posted by UPSET THE RHYTHM at 03:29 No comments:

Primo's debut album out today! Plus full details of next month's Shopping concert in London!

Posted by UPSET THE RHYTHM at 10:36 No comments: 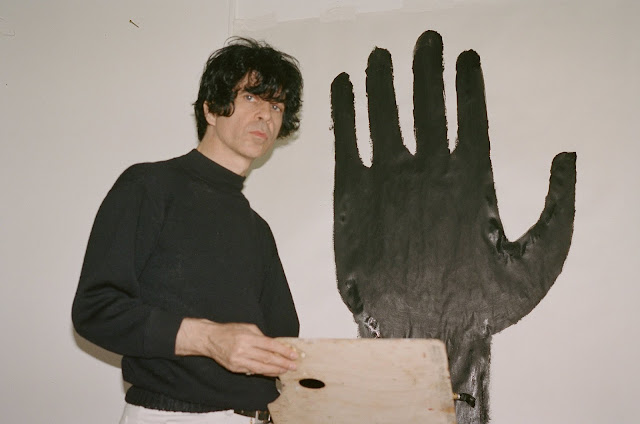 ESCAPE-ISM is the nom de guerre of mythic rock ’n’ roll provocateur / theorist / revolutionary Ian Svenonius (performer, author, filmmaker, etc). Svenonius is known for his work in the music groups The Make-Up, Chain & The Gang, XYZ, Weird War and author of underground bestsellers such as The Psychic Soviet, Supernatural Strategies for Making a Rock 'n' Roll Group, and Censorship Now! Recognised by Performer Magazine as the "greatest performer on the planet", Svenonius is profound, prophetic, perverse, and poetic. His debut solo album an 'Introduction to Escape-ism' was released through Merge last year and teamed up a drum machine, guitar, cassette player, and a single voice singing out... for a way out. Svenonius' songs cry out for love, justice, redemption and insurrection, they stomp on convention and clobber notions of what music can be. Live, Escape-ism a new paradigm of performance: raw, gestural, idiotic, sublime, revolutionary, poetic, faux naif, unknowing, a drainage pipe that leads to who knows where.

‘The Lost Record’ is Escape-ism’s new album on Merge and is already a classic, destined to bewitch the minds, hearts, and dancing shoes of any rock ’n’ roll fan who happens to discover it, for as long as such creatures exist. Without the high-octane hype machine of the mind-control minstrels who hypnotize the hapless through the mass media, ‘The Lost Record’ is bound for inevitable obscurity, but—with its timeless tunes, poignant message, and innovative sound—rediscovery and immortal status is equally assured! Music enthusiasts will be thrilled to be the ones clever and kind enough to have rescued this platter from oblivion.
https://escape-ism.bandcamp.com/ 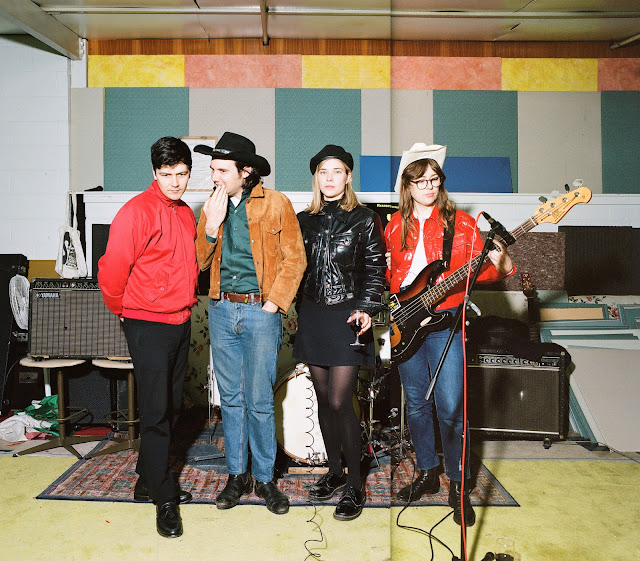 Posted by UPSET THE RHYTHM at 07:57 No comments:

PRIMO are coming to London next month! 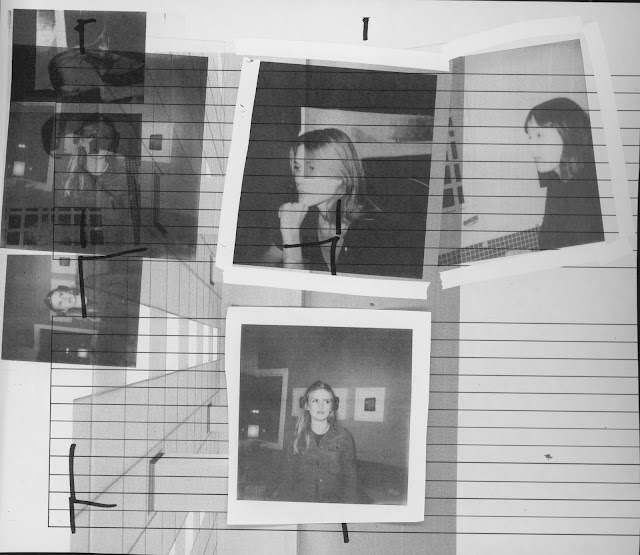 Primo are Xanthe Waite, Violetta DelConte Race and Suzanne Walker. As a trio from Melbourne writing up-tempo, terse chorus and verse, Primo make use of two guitars, drums, sound effects and a group vocal sensibility to ornament their enquiries into deconstructed punk and indie rock. Their songs chime and charm, sounding at times bountiful, at others brittle, always buoyant with attention to detail. Primo songs are alive and inquisitive, chasing down questions for answers long sped-away, amidst minimalist shuffle beats and ringing-out chords. The group’s debut album ‘Amici’ is a triumph of the underplayed, its small details pull focus, allowing the album to treat us to unexpected truths in plain sight.

Primo's newest member since 2018 is Amy Hill, who also plays in Terry and Constant Mongrel, on bass. Outside of Primo, Xanthe and Violetta both have lent their guitar skills to Terry and The Shifters respectively, whilst Suzanne works in film too. The band’s debut album ‘Amici’ will be released as LP and CD on Upset The Rhythm on July 13th and followed up in August with a European tour.
http://www.upsettherhythm.co.uk/primo.shtml 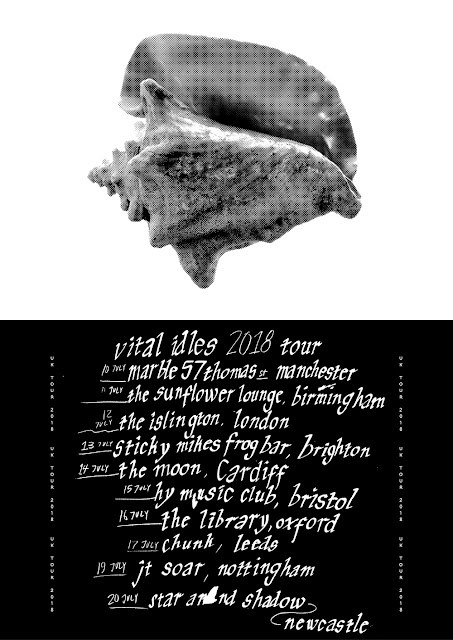 VITAL IDLES are taking to the road next week!
Their music is as wonderfully acute as it is astute, smart and minimal in measures. This UK tour is in support of their fantastic debut album ‘Left Hand’, out now on Upset The Rhythm.
Look out!

+ Resonance FM session too on the morning of the 14th with Dexter Bentley!

Posted by UPSET THE RHYTHM at 03:47 No comments: 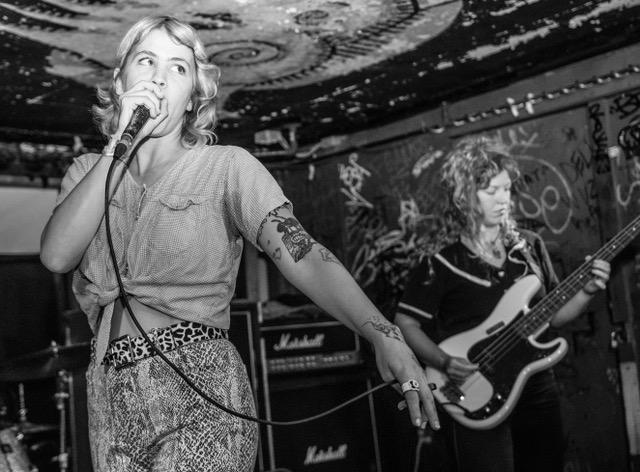 PATSY are a New Orleans band who make fast, slashing, catchy-as-hell punk rock. The band is led by one Candice, also a member of the band Mystic Inane, and their schoolyard-taunt snarl is one of the coolest things we’ve ever heard. After a series of excellent singles over the past couple of years, the band recently released their debut ‘mini’-LP ‘LA Women’ (La Vida Es Un Mus Discos), which you can stream below. Where prior singles tended to stay firmly in the hardcore lane, ‘LA Women’ finds Patsy blending an inspired mix of surf, garage, 80s hardcore, skewed 80s new wave, and garage.  Their straight ahead hardcore jams – including a re-recorded version of “Nazis are so Plain” from their 2015 demo – bear a slippery quality that reminds of DKs, particularly in the woozy guitar work (see, in particular, album highlight “Society Ape”).  Elsewhere, tracks like the excellent “Heathen” and opener “Count it Down” bristle with a-go-go worthy garage energy. This will be the band’s first time in London on their debut European tour!
https://itspatsy.bandcamp.com/