Good morning everyone!
Tomorrow we’re beyond ecstatic to have DEERHOOF back in town for a show at The Dome in Tufnell Park. PEGA MONSTRO and COWTOWN will both be supporting so it looks set to be an amazing night. Live music will start around 8pm and there are very limited tickets remaining (less than 40) so well worth buying in advance to save missing out on the door. Read on for the whole story, alongside our full listing for FUZZ on September 5th too. In other news our upcoming show program for Autumn/Winter is now furnished with the new events for THE SPACE LADY, CALVIN JOHNSON, TO LIVE AND SHAVE IN LA, as well as a double date at the imminently opening DIY Space For London involving PC WORSHIP and TROPICAL TRASH. Check out their website for lots more exciting events planned and become a member ASAP if you haven’t already! Here cometh the words…. 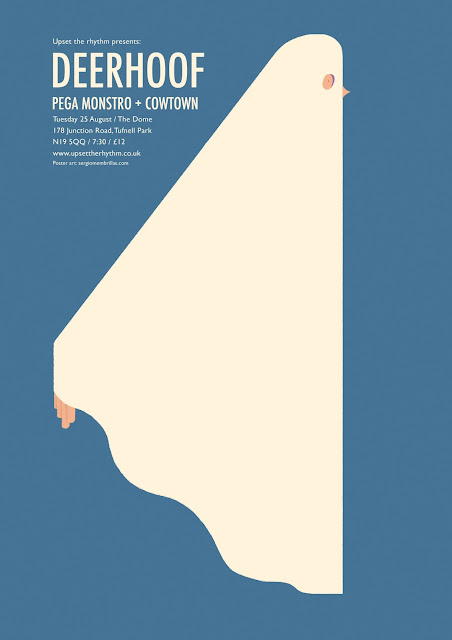 DEERHOOF
PEGA MONSTRO
COWTOWN
Tuesday 25 August
Tufnell Park Dome, 2A Dartmouth Park Hill, Tufnell Park, NW5 1HL
7.30pm | £12 | http://www.wegottickets.com/event/313096
DEERHOOF are the only band that sound like Deerhoof. Their early records were essentially rehearsals recorded on rubble. But in that rubble Deerhoof had planted a seed. And that seed took: when before the steady chug of post-Velvets indie had been the rule, Deerhoof's neck-snapping syncopations, classical melody, minimal gear and maximal music has slowly become part of the vocabulary: St Vincent, Flaming Lips, Tune-Yards and Dirty Projectors are just a few of the bands to have absorbed some Deerhoof DNA. Satomi, Ed, John and Greg have never become rich and famous but they've triumphed in their own way - this year, Deerhoof celebrates its 20th anniversary, having made a dozen consistently acclaimed albums and taken hundreds, maybe thousands, of joyous and loyal audiences all over the planet on the never-the-same-twice thrill-ride of their live show. Pitchfork have labelled Deerhoof as "the best band in the world”, whilst The New York Times described them as “one of the most original rock bands to have come along in the last decade.” Last November Upset The Rhythm completed a life ambition when they released Deerhoof’s new album ‘La Ilsa Bonita’, now the band return to play UTR for the first time since their sold out Oval Space show back in February. Deerhoof’s ecstatic and unruly take on pop music has constantly evolved, meaning that they always sound like the future and that’s never been more true than now they’ve chalked up a double decade.
http://deerhoof.net/

PEGA MONSTRO are sisters Júlia Reis (drums) and Maria Reis (guitar, keyboard), both sing! Born and raised in Lisbon, Portugal, Maria and Júlia have been playing music together since they were 15 and 17 respectively, in other groups first before resolving on becoming a duo. Back in 2010, both sisters started a record label, along with some of their musician friends, called Cafetra Records to document Portugal’s garage punk scene. Cafetra represents a community of like-minded musicians who all help each other, making music that they’d want to hear, powered by enthusiasm. 2012 saw Pega Monstro release their self-titled debut album, making for a raucous record that met with critical national acclaim. Now Pega Monstro have a new album ready for Upset The Rhythm entitled ‘Alfarroba’ and released this month. The name of this second album, it’s title meaning ‘carob’, after the sweet tasting bean that grows in the wild trees that spontaneously spring up along the Mediterranean coast. Maria explains further, “In Portugal there are a lot of carob trees in the Algarve and our mother's side of the family is from there, we spent every summer there as children. The scent is unlike any other. So apart from the phonetic appeal of the word, ‘Alfarroba’ is also a homage to that heritage”. The songs on ‘Alfarroba’ deal with many themes, some universal topics like love and growing up, others focusing on the nature of writing songs themselves, whilst some try to make sense of the world from a female perspective. Expect torrents of energy, snare rolls triggering flights of guitar, and fogs of cymbal shimmer forming steps for their vocals to climb.
https://soundcloud.com/upset-the-rhythm/pega-monstro-braco-de-ferro

COWTOWN formed back in 2005, and whilst they may have changed line-up and musical aesthetic, their love of making and playing music has never diminished. Over the years their sound has morphed into a mix of post-punk and new wave; with an added electronic twist. Whilst the Leeds trio may have progressed from playing house parties and squats, you can tell from their music that this is where their hearts truly lie. ’Dudes Vs Bad Dudes’ is the band’s third album and marks somewhat of a landmark in their evolution. They get their kicks from creating the music they love and travelling around the UK playing all manner of venues. ‘Dudes vs Bad Dudes’ is an impressive journey through a plethora or music styles, demanding your attention and making you long for more. Not only have the band produced a record of the highest quality, they have managed to create one which is pure unadulterated fun to listen to.
https://cowtown.bandcamp.com/ 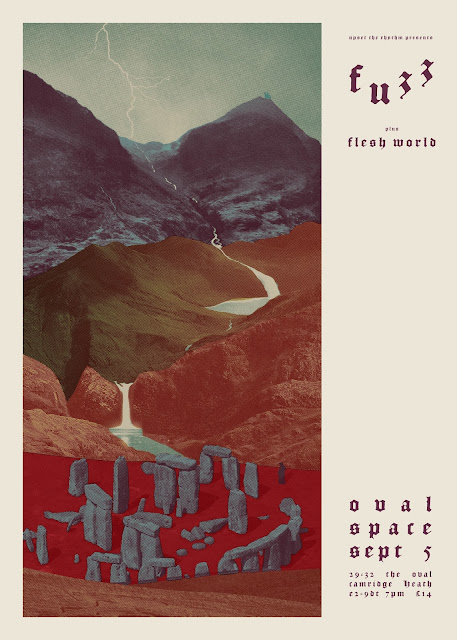 FUZZ is Ty Segall (drums / vocals), Charlie Moothart (guitar / vocals) and Roland Cosio (bass). They’re heavy rock lifers - three California bred dudes who have been refining their riffs and getting weird together since high school (which wasn’t that long ago, actually). If you are not already aware of Segall, well, what’s up? He’s one of garage rock’s most prolific sons. Moothart plays guitar in The Ty Segall Band and was also a member of The Moonhearts, which included Cosio on guitar. Way back in the early ’00s, all three played in the Epsilons. Fuzz was formed a couple years ago as a collaboration between Segall and Moothart, but only recently did the pair have sufficient time to guide the band out of side-project limbo and into a recording studio. Straight off the bat they released two singles, “This Time I Got a Reason” (Trouble In Mind) and “Sleigh Ride” (In The Red). Around the time of the latter, Cosio joined on bass. They are not dabblers or dilettantes. Fuzz flipped through used bins, hard drives and record collections of the world, seeking out the finest weirdo cuts. The band’s self-titled debut LP, which was recorded by Chris Woodhouse (Thee Oh Sees, The Intelligence), dives deep, drawing inspiration from the more esoteric reaches of heavy metal pre-history. There are Sabbath and Hendrix nods, obviously, but on “Sleigh Bells” you might also catch a whiff of UK progressive blues business like The Groundhogs, particularly when the song quits its 10/4-time intro and reboots into fullbore choogle. Maybe you’ll even glimpse the ghost of Australian guitar legend / sharpie guru Lobby Lloyde sniffing around “Raise.” The mood is not light. The songs project a state of perpetual paranoia and eroding mental health. And as it should be, you know? This Autumn, Segall, Charles Moothart, and Chad Ubovich are back with their new LP ‘II’. It's out October 23 via In The Red and going off the first two singles "Rat Race" and "Pollinate" is set to melt all minds, things are going to get wild!
http://www.intheredrecords.com/pages/FUZZ.html

FLESH WORLD began with Scott Moore (Limp Wrist) and Jess Scott (Brilliant Colors), in a microscopic lofted-bedroom in San Francisco’s Panhandle district. Scott and Jess merged their respective musical histories of hardcore and pop, almost by accident. Without any mention of their previous bands, they bonded over the films of Kenneth Anger, the guitar work of Lou Reed and William Reid, the writing of Jean Genet, and the shirtless figures of David Hockney paintings. The pair slowly built songs in between hanging out at drag bars and punk shows, watching SF decay into some sort of inverted Detroit, isolated wealth which sent a lot of young artists running in the last couple of years. Flesh World is sort of what’s left of that, where the only places to have fun are still leather bars, house music clubs, basement punk shows. After the music and vision of Scott and Jess began to coagulate they brought in Diane Anastasio also of Brilliant Colors to complete their basic and primitive sound.
http://fleshworldusa.tumblr.com/

TAMAN SHUD are a young band whose primary interests include paraphilia, vivisepulture, scaphism, Crom Cruach, Mokèlé-mbèmbé, cannibalism and the Marianas Trench. The band’s heavy, gothic riff monsters are a wild, orgiastic release from day job existence, an inverted productivity chart over a blazing pyre as blunted melodies are swiftly pitchforked off the nearest cliff by the twin bass guitar assault of Tasha and deadpan Liverpudlian Derry. It's an unholy fusion of post-punk, no wave and psychedelic metal, like the Butthole Surfers of 'Sweat Loaf', the Sonic Youth of 'Death Valley 69' and the Chrome of 'TV As Eyes' being mugged by Les Rallizes Dénudés and bundled off to a Walpurgisnacht convention of satanic biker gangs. Or as the band themselves put it, somewhat more succinctly: "DNA meets Mainliner. Meets Red Stripe.
https://tamanshud1.bandcamp.com/

Thanks for reading, catch you tomorrow!
UPSET THE RHYTHM
x

PC WORSHIP and TROPICAL TRASH are coming to LONDON next month! 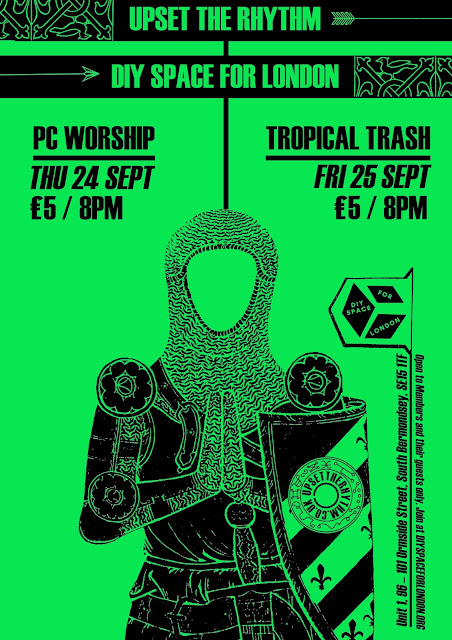 Join up as a member of DIY SPACE FOR LONDON here: http://diyspaceforlondon.org/join/

x
Posted by UPSET THE RHYTHM at 03:12 No comments: