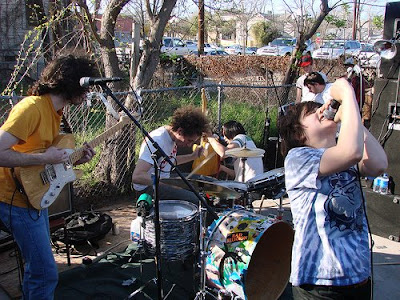 Ponytail were one of my favourite performances of the whole weekend. Speaking to people at other shows, it seems this feeling was pretty unanimous.

They played in the afternoon in the blazing sun on the patio at Ms Bea's as part of Todd P's festival within a festival (much more about that later).

They are technical, abrasive, completely self-contained, with short arrhythmic songs. They are buoyant and savagely friendly, which is probably because they are from Baltimore. Their singer, Molly, has a unique singing style and posture which I can't even begin to describe. And their drummer Jeremy is simply breathtaking. After they played they sold merch out of the boot of their car. 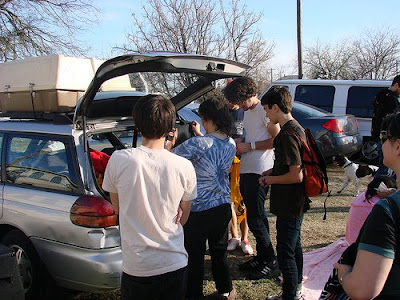 We saw Wizardzz in Emo's, a venue in Austin that had the Flintstones on the wall. There was also an elephant with its eye popped out. If you merge the Underworld with the Windmill and put the stage in the furthest away corner you get an idea of what this place was like.

Wizardzz is Brian Gibson and Rich Porter. Brian provides long heavy pounding drum loops over Rich's electronics. And this is electro electronics, sputtering and fizzing and unrelentingly danceable. It's a totally different proposition from Lightning Bolt, but just as fierce and we enjoy it a lot.

Dan Deacon hasn't brought Ultimate Reality to the UK yet, so the live performance of this Arnold Schwarzenegger-themed slice of psychedelia was a treat. It may have been less of a treat for the guy behind me, who was dressed like Dan and loudly told everyone who could listen that Dan was going to "get all these boxes out of a suitcase and then everyone will go mental". During the performance he continued with his rant; "Pitchfork said it's okay to dance!" Well, that makes it okay then. (Brief aside - I saw three Dan clones at SXSW. I don't think he realises that he's pioneered a trend.)

The performance is a screening of a film about the life and work of Arnold Schwarzenegger, with visuals by Jimmy Joe Roche and music by Dan. Those familiar with Jimmy's films will instantly recognise the lurid colour, the merging of images and the juxtaposition of scenes. It is funny and mesmerising and makes you want to dance all at the same time. The recorded music is enhanced by the live addition of two drummers, who perform a drum-off of sorts. These drummers are Jeremy Hyman from Ponytail (yes!) and Kevin O'Meara from Videohippos, another SXSW highlight. They are stylistically quite different, which adds extra subtlety and intricacies to their rhythms. It is like watching a feat of endurance, or a sacred ceremony, and it is the live element that allows the performance to transcend being a post-ironic film about Arnie. Yet the mood is kept light (and Jeremy and Kevin are given room to breathe) by Dan's live spoken parts, where the narrative of the film is pushed forward. It is an extraordinary performance, and a girl in front of me had the last word "I could have watched it for hours".

After the show we conspired to go to Todd P's party at the University of Texas. We got a cab right next to the bar where REM were playing. We only twigged that they were playing live when we got in the cab and some kids ran across the road to try and jump the fence. We just thought it was a DJ playing Losing My Religion really loudly. We didn't stay for long at the University as the party was outside and it was too cold. The University complex itself was grand and foreboding and made an interesting contrast to the gaggle of bands and people sitting on the manicured lawns. 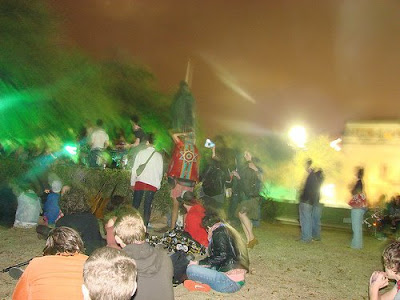 UPSET THE RHYTHM IN TEXAS PART ONE 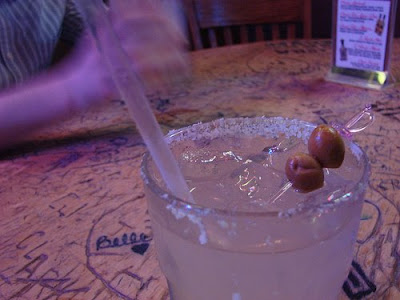 SXSW must be the strangest music festival in the world. Several thousand bands trek to Austin, Texas for five days. In official showcases, bands play in car parks, mexican restaurants, the Hilton hotel and in the odd one or two venues proper. Outside of official showcases bands play on patios, in houses, on bridges and in shops. You can walk up or down 6th Street, the heart of the official festival, and hear approximately forty bands at one time. Most of them sound like "proper" rock bands. You are surrounded by immaculately coiffed and preened wannabe rock stars, corpulent record execs waving their laminated badges (which give you priority entrance to all the shows) and film crews trying to "discover" the next big thing. 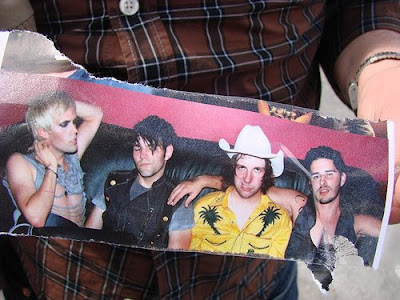 Somehow, we were allowed in. And more remarkably, we were able to showcase out artists. Given our pretty blatant diy ethics, it may seem an incongruous fit. But amongst the industry hype, SXSW demonstrates that underground music is alive and well. Not only is this evident in the small labels that are able to showcase, but in the thriving unofficial parties and shows that are everywhere. In this heady mix of bands, labels, promoters, journalists and youth orientated brands trying to make their mark, there was somehow space for some of the most amazing performances I have seen in a long time.
Posted by UPSET THE RHYTHM at 10:45 No comments: 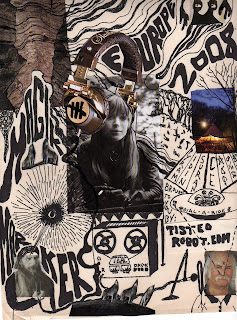 WHOO! One of our favourite bands are coming to Europe this month, we are super excited, this is what happened last time in London.

Posted by UPSET THE RHYTHM at 10:05 No comments: 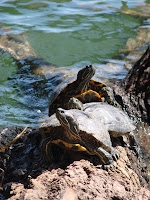 We have decided to set up a blog to share things with you that might not fit on our website and which makes use of the flickr and youtube things that we collect through this adventure. It also gives us all a chance to talk about stuff that's on the edges of what we do and some matters that are completely irrelevant.

Beavis was brought to you by Ian from Japanther. The photograph at the top of the page is of Lucky Dragons from our recent party at Ms Bea's in Austin, Texas for SXSW. A new album from Lucky Dragons is due out on Upset the Rhythm in May.

Two things happened to us in Austin that were completely unexpected. The first is that we ate some cactus (opinion is sharply divided on whether this was a pleasurable thing or not) and the second is that we saw turtles in the Town Lake. They were everywhere! And when you approach them they fall off their logs and stones and swim away. Here are some for you.
Posted by UPSET THE RHYTHM at 12:20 2 comments: