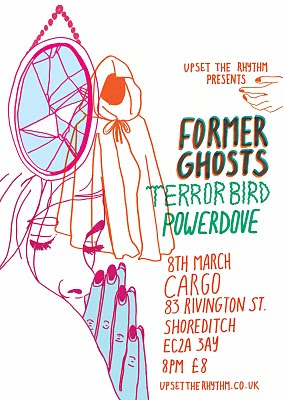 FORMER GHOSTS is a synth-pop project from Freddy Ruppert. The band in recording mode is also comprised of Xiu Xiu's Jamie Stewart and Zola Jesus' Nika Roza Danilova, along with Yasmine Kittles from Tearist too. Ruppert is the lead songwriter on this brutally gloomy, effortlessly honest project. With their debut album 'Fleurs', the band created an album so intense that it can become hard to listen to. And we say this in an effort to compliment their ability to render the themes of the album - heartbreak, death, love, needing, wanting - so sonically accurate that they replicate those feelings in the listener. Album number two 'New Love' was released last November also on Upset The Rhythm and was very well received. The album deals with new love as a cure for the heartbreak and jealousy of the past, but a beginning to a new obsession - the search to replace the old love. For this show Freddy will be accompanied by Jamie Stewart for the entire "Fleurs-heavy" set.
www.myspace.com/formerghostssleep

POWERDOVE aka Annie Lewandowski was born and raised in the Midwest and now lives in England. Her first band, Emma Zunz, recorded their self-titled debut album for Tellous in 2006. She has also recorded with Hawnay Troof, The Curtains and Xiu Xiu, and toured the US and the UK as a member of The Curtains in 2006. As an improviser on the piano and accordion, Annie has recorded with Doublends Vert, Caroline Kraabel and the London Improviser's Orchestra, and has performed with Fred Frith, Sylvia Hallett, Jennifer Pike, John Edwards, John Butcher, Chris Cutler, Charles Hayward, the London Improviser's Orchestra and many more.
www.myspace.com/powerdove
Posted by UPSET THE RHYTHM at 03:59 No comments:

"AS PART OF THE LUMINAIRE'S WAKE WEEK" 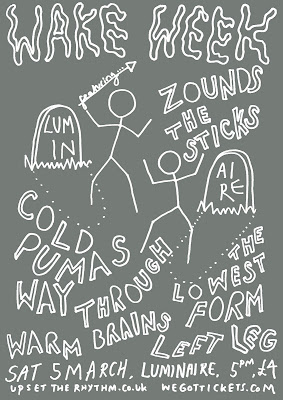 
ZOUNDS are an English anarchist band formed in 1977 by Steve Lake. Originally part of the cassette culture movement they were also involved in the squatting and free festival scene. The name of the band is derived from the old English minced oath coined by William Shakespeare: "zounds", which is a contraction of "God's wounds", referring to the crucifixion wounds of Jesus Christ. Their first EP, Can't Cheat Karma, was released on the Crass Records label and features possibly their most well known track "Subvert", a call to arms against the grind of daily life. The release of this EP and association with Crass led to an increase in the bands profile in the embryonic Anarcho Punk scene, touring with both Crass and the Poison Girls as well as performing several squat gigs in West Berlin. The band released their first album ‘The Curse of Zounds’ on Rough Trade Records in 1981, followed by a further three singles on the same label before splitting up in late 1982 disaffected with the Anarchist music scene in general and worn out from touring. Zounds have recently warmed to playing live shows again, so it’s a real pleasure to have them on board for this special show.
http://www.zoundsonline.co.uk/

COLD PUMAS specialise in pounding, motorik repetition that grabs the groove for dear life. Running rings around themselves with exultant abandon, these three spirited men from Brighton are haunted by grand visions, combining cyclical, harmonised guitar riffs, impressionistic vocals and interwoven rhythms to great effect. At times recalling the metronomic tendencies of Abe Vigoda and the extended, mesmerising pulse of NEU or Boredoms, Cold Pumas echo in a cave very much of their own, with the last year seeing a split record with Male Bonding through Faux Discx, a RMX EP with Hungry For Power and a 7” on Upset The Rhythm. Look out for a recent split 7” with Women, Friendo and Fair Ohs, as well as an new single on Volar Records too.
http://coldpumas.tumblr.com/

THE STICKS are a stripped down garage party band from Brighton. They bash drums, sway on the bass and claw at guitar - often swapping over instruments between songs live - and yelp with melodic abandon and delight. The Sticks were recently dubbed as 'semi-amateur', this may be true. With cheap, unreliable equipment they manage to tease out a cacophony of crashing drums and raucous guitar melodies. The key elements of the trio's sound are undoubtedly drawn from the rudimentary ideas found in the more inept efforts of mid-sixties teen bands such as The Chimney Sweeps and The Keggs, as well as more modern day equivalents The Black Lips, The Coachwhips or The Hospitals, say. The Sticks have a double 7” album available through Upset The Rhythm and a brand new 7” on M’lady’s Records.
http://www.myspace.com/thsticks

THE LOWEST FORM like it loud and play it fast. Featuring members of Please, The Human Race, Birds Of Delay and Army Of Flying Robots, this relatively new heavy gang are quickly becoming master craftsmen of the sex/vid-styled school of noise punk.

WARM BRAINS is the newest project from DIY producer extraordinaire, Rory Attwell. With a distinctive lo-fi feel that has become a trademark of the acts that Rory has produced (Robin from Male Bonding now also plays in the band), Warm Brains hurl wiry woven guitars and winter-tinged vocals into a colourful storm of urgent noise and on-the-spot dynamic rawk. Marshall Teller will be releasing a 7” soon and the follow up album ‘Old Volcanoes’ in April.
http://www.myspace.com/warmbrains

WAY THROUGH are a duo from Shropshire, phasing in and out with guitar, tapes, damaged drums and vocals. Haunted by a wrong-footed pastoral punk the band write ragged intuitive songs, shot through with technicolour noise. Using repetition, swift interplay and happenstance they have a sound that is both fun and testing, a sound that can do anything and can go anywhere.
http://www.myspace.com/wearewaythrough

LEFT LEG are Aaron, Ed and Vicki from London, previously of Bloody Knees and Sad Shields. This new band have a driving polemic slant like much early Dischord punk, only with that particularly British awkward twist, see Huggy Bear, Slampt et al.
http://leftleg.tumblr.com/
Posted by UPSET THE RHYTHM at 02:51 No comments: 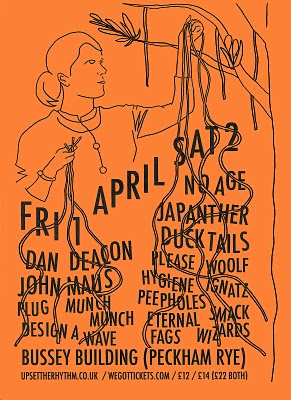 April Fools' Day is an often maligned time of the year. Since the times of Chaucer the day has persisted in the unravelling of sanity, practical jokes and tomfoolery, even though nowadays we're lucky to notice a hoax in the papers before all fun is culled by noon.

This is why we have decided to celebrate the day in style, restoring the event to its anarchic origins with a 48 hour spectacle of fun and music taking place in Peckham Rye's old cricket bat factory, The Bussey Building.

The two day event is entitled Spaghetti Tree in homage to the 1957 Panorama broadcast which fooled the nation.

On Friday 1 April we're lucky enough to have US sonic eccentrics Dan Deacon and John Maus throwing down the gauntlet to the UK's finest keyboard-weirding acts including PLUG, Munch Munch and Design A Wave. After the revels we'll lead a procession into the darkness of the Rye in an attempt to see one of William Blake's childhood visions of an angel in a tree.

The next day things get blown further apart as logic continues to be defied, this time with No Age, Japanther, Ducktails, Ignatz, Please, Peepholes, Hygiene, Woolf, Smack Wizards and Eternal Fags all performing across the space's several rooms.

So yes, we're guaranteeing the most fun April Fools' Day ever, along with it's confused Saturday brother. Feeling hungry? Let's reap the Spaghetti grove!
Posted by UPSET THE RHYTHM at 09:41 No comments: 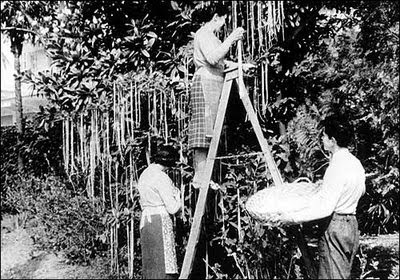 Afternoon all!
Tonight's Lucky Dragons show is TOTALLY sold out now, apologies if you didn't manage to get tickets in time. We'll have Lucky Dragons return later this year, next time with a new album, watch this space as they say. We have tickets aplenty for Friday night's JAPANTHER show, including some on the door too! So panic over, phew. Lots of new shows confirmed this week, where to start? First and foremost we've just announced our April Fools Two Day party entitled SPAGHETTI TREE. Taking place at the Bussey Building in Peckham on April 1st and 2nd we have DAN DEACON, NO AGE, DUCKTAILS, JOHN MAUS, PLEASE, MUNCH MUNCH, IGNATZ, PLUG plus many more acts performing. Will definitely be a fun one, much like our WAKE WEEK show to see off the Luminaire next month too, which sees ZOUNDS, COLD PUMAS, STICKS, WAY THROUGH and THE LOWEST FORM dancing over graves for a budget £4 extravaganza. Our listings section below is bulging with all the info you need to know, including new additions for MI AMI, NO BABIES and a special live soundtracking of French nature film 'The Bear' also by NO AGE in early April. Woah, might buy a new diary. Here's blurbs for tonight and Friday...

Lucky Dragons inhabit Los Angeles. They create an ecstatic form of electronic music that celebrates the spirit of life as well as the magic of genre boundaries. Their music is surprising, inventive and uplifting much like their impressive live performances, which usually involve brain-wrangling visual projections and various forms of inspired audience-generated sonic interaction. For this tour, Lucky Dragons will be in solo mode with Luke Fischbeck at the helm, playing plenty of new music including tracks from the recent 12" EP and 'Shape Tape' on Teenage Teardrops.
http://glaciersofnice.com

Halo Halo take their name from a very tasty, multicoloured desert from the Philippines. They are Jack on drums, singing and harmonica and Rachel on banjo, singing and harmonica. Halo Halo make music that careens, drawing on Appalachian folk rambles as well as the hyper melodic clattering Sinawi vibes of Korea's shamanic past.
http://vimeo.com/15467546

We'll also be playing the new John Maus album 'We Must Become The Pitiless Censors Of Ourselves' in its entirety towards the start of the night, so come early.

Japanther is an art project established circa 2001 by Ian Vanek - who plays drums, cassettes and sings - and Matt Reilly - who plays bass and Casio SK-1, and sings. The explosive, unapologetically punk power duo have collaborated with a variety of artists including Penny Rimbaud, Dan Graham, Eileen Myles, Ninjasonik, Anita Sparrow and Spankrock. They have made a name for themselves through their energising live shows, sometimes in unique performance situations - alongside synchronised swimmers, a top the Williamsburg Bridge, with giant marionettes and shadow puppets, and from the back of a moving truck in SoHo, with giant dinosaurs and BMXers flying off the walls. Last year saw them release their wildly awesome album 'Rock N Roll Ice Cream' on Menlo Park.
http://japanther.com/

Shellshag were born out of the long-running public arts and living experiment warehouses in San Francisco called Starcleaners, but now reside in Brooklyn. They've been described as an amalgam of The Breeders, Sonic Youth, Guided By Voices and early Superchunk. And, because they're a male guitarist / female drummer duo, those touch points (Matt and Kim, Juicifer and White Stripes) get tossed around like confetti too. They've played with everyone from Iggy Pop to their label mates, Screaming Females, with their first, now out of print 'Gary Young' EP recorded by Pavement's Gary Young. New album 'Rumors In Disguise' is their most inspired and concentrated record yet - from the grin-laced stubborn pride in Johnny Shell's vocals to Jen Shag's tom-heavy heartbeat rhythms, every inch of tape is as real as it gets.
http://www.myspace.com/shellshag

Bitches are Staz on drums and Blake on bass, both singing whilst ripping up raucous. They bludgeon and slap with style, they do unspeakable mimes involving candles, they get seriously ill from eating weird burritos and they have numerous releases available now through Deathbomb Arc, Isolated Now Waves and Scotch Tapes.
http://www.myspace.com/peaceandbitches 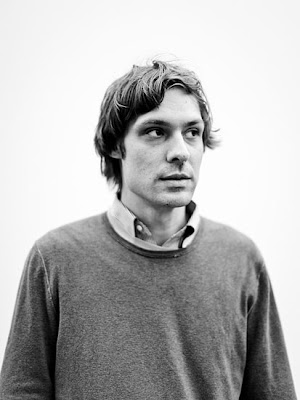 John Maus is heading over next month for a quick Euro tour ahead of his new album release! If that wasn't exciting enough PLUG will also be joining him on 1/2 of the dates including our two day London April Fools party Spaghetti Tree! Full dates...

* with PLUG
Photo by - Mark Blower
Posted by UPSET THE RHYTHM at 02:00 No comments: