This video rules! It's for Happiness from the Feathers & Hallways 7" we released earlier this year. Chicago based filmmaker and producer, Joel Fernando made it, here's some of his words about it:

"The video is a psychedelic hodgepodge of fantasy and color, featuring 65 + people from the Baltimore, New York City, Chicago and North Carolina areas, filmed one by one on green screen and combined together to appear as a group in this video".

Green screen, well I never, could've fooled me!! Future islands will be in the UK soon, touring with super chums EAR PWR, check out the dates... 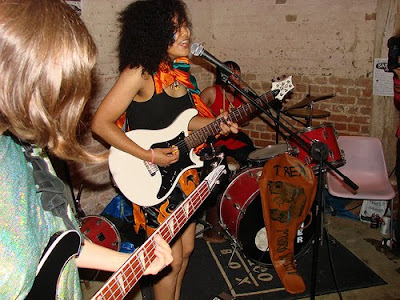 The record is finished, and now they're out on tour, a whirlwind of activity! Go see! All shows with BLOODY KNEES and most with a whole host of other goodness: 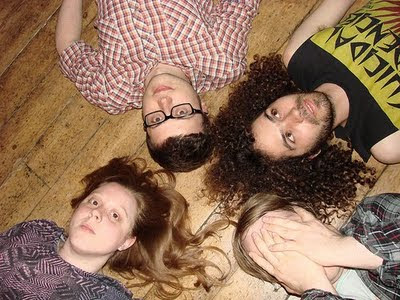 It is no secret that Hands on Heads are comprised of four of the people who work with Upset the Rhythm (myself included). But what may be less well known is that the band will be splitting up at the end of August, as drummer Chukka is moving to Australia for the foreseeable future.

To celebrate the end of an era, we are releasing our new album, which includes tracks from two recording sessions from the last year or so. At the moment you can purchase our handmade CDs from the webshop (http://www.upsettherhythm.co.uk/shop.shtml) for £6 including postage within the UK, and we hope to release a vinyl edition later in the year.

There will be one or two last chances to catch us play, and we'd love to see some of you there:
22nd August 2009: Cable Street Riot at Jamboree, Limehouse with Pheromoans, Bo Ningen, Please, Wild Palms, Private Trousers and loads more
29th August 2009: Old Blue Last with Nodzzz
Posted by UPSET THE RHYTHM at 11:48 No comments: 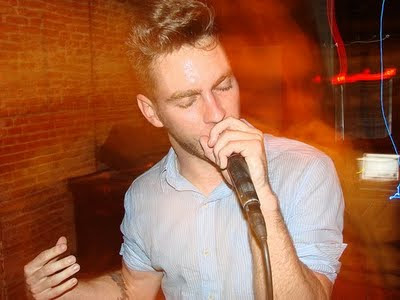 The tapes are with us for the Former Ghosts record (new project of Freddy Rupert, Jamie Stewart and Nika Danilova) which is going to be called Fleurs and is scheduled for release later in the year. I want to show you the artwork and everything, but its all secret for now. There is a track ("Us and Now") previewed on Pitchfork to whet your appetite at the following link (http://pitchfork.com/forkcast/2/). We were privilged to see Freddy perform songs form the record (in solo guise) in LA and SF last month. More on this to follow!
Posted by UPSET THE RHYTHM at 11:33 No comments: 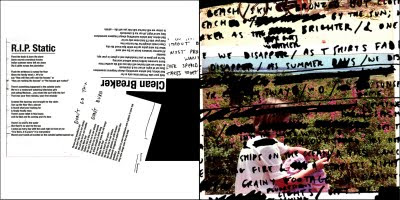 You may already know that the Gentle Friendly album is coming out on 19th October and that somewhere deep in the belly of Europe skilled artisans (I kid you not*) are putting this together as we read.

HOWEVER, the impatient among you will rejoice, for we have a digital-only free single for you at our website featuring two tracks from the record, "RIP Static" and "Clean Breaker". Follow the link to www.upsettherhythm.co.uk where you can also download a more hi res version of the art than above, or from Pitchfork, who are kindly previewing the tracks too! 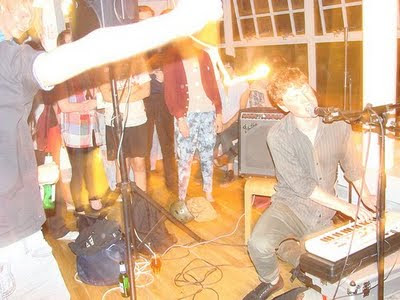 Here is a photo of Gentle Friendly from the Whitechapel Gallery show on 26th June.

*apparently there is one person at the GZ pressing plant (where the vast majority of European labels get their records pressed) who can do endless run out grooves and etchings. Just one.
Posted by UPSET THE RHYTHM at 11:23 1 comment:

MULTIPLE POSTS!
Posted by UPSET THE RHYTHM at 11:22 No comments:

This video is for "Shadows in Daylight" by Silk Flowers. It is by Brian Degraw from Gang Gang Dance and it is AMAZING!

SILK FLOWERS "shadows in daylight" from brian degraw on Vimeo.

This track comes from the new s/t album, released by PPM, out now and heavily endorsed by UTR.
Posted by UPSET THE RHYTHM at 10:59 No comments: 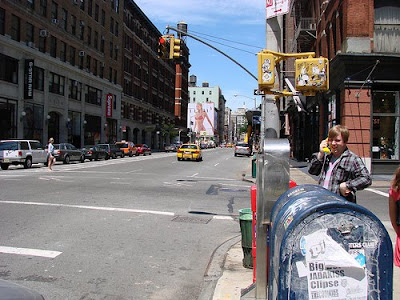 What else happened in New York?

Well, we were exceedingly well looked after and cared for by Aviram, who (despite having more important things to do like make art and prepare for the exceptionally busy few months that the Silk Flowers LP will bring) showed us some old sights and new tricks and hooked us up with people we haven't seen in ages.

Shout outs now to Brendan and Andrea, John and Amanda, Peter, Matthew, and much love to Ethan and Heather, and all the New Yorkers and only-in-New-York-for-a-day-ers that took time out in their days to hang and, usually, eat food (we're that predictable). Avi has left me slightly damaged though by taking me for coffee in a particular place, knowing damn well I will never be able to get coffee that good in London and I will spend the whole time frustrated about this, argh! 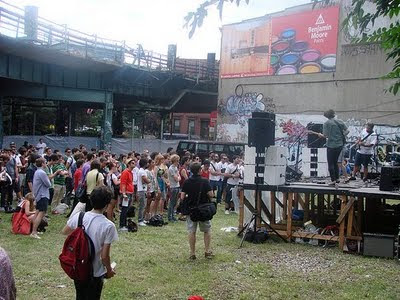 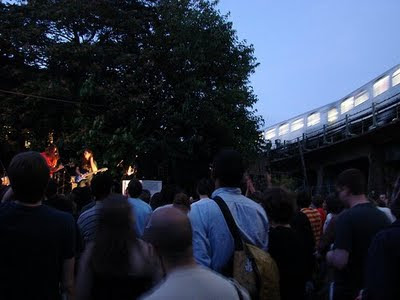 We went to the Captured Tracks/Woodsist all dayer, where we bumped into buddies from home Nick and Miranda and we wondered just how the hell you could get permission to hold a show under a subway line, in a semi-residential area, for two days. I particularly enjoyed waving to the drivers when they went past. 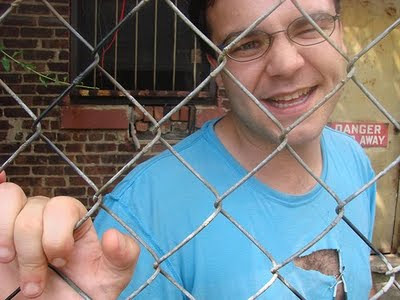 The show was fun, especially meeting up with Matthew Mondanile and Shawn Reed again and seeing Samuel Herring locked behind a fence (above, still not sure why this was the case but had me laughing for ages). Enjoyed seeing Real Estate (above, top) and Ganglians and Kurt Vile (above, bottom), felt ambivalent about sitting on pebbles, wondered out loud about the current lo fi garage revival and its origins. Felt particularly inadequate for not having a comedy tattoo (you know the type, way more prevalent in NY than here, though they're coming our way) so Chris did the honours with a sharpie, so for most of our holiday I had a giant Marshmallow Man on my forearm. GREAT.

Missed the 4th July fireworks because the powers that be have moved them to the other side of the river (with attendant controversy: http://www.brooklynvegan.com/archives/2009/05/nycs_4th_of_jul.html) but did almost get hit on the head by someone throwing fireworks off a building and then saw a man in a t-shirt that said "Fuck England". Amazing. Sadly, did not get a shot of this beauty. But, in response, we hate you too. 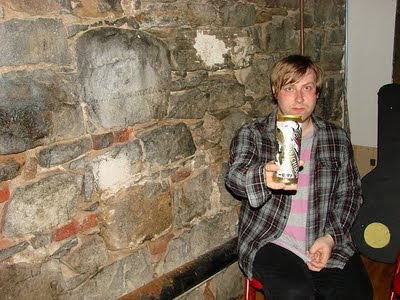 On the 5th July we got to see John Maus play another show (at Monster Island Basement, to get that full Groundhog Day effect) which was less rammed than Friday, so altogether more pleasant. We also stacked up on ridiculously sized US cans of beer (why so big? the beer just gets warm!) so it was a bit more of a relaxed affair.

More use was made of the trapeze. 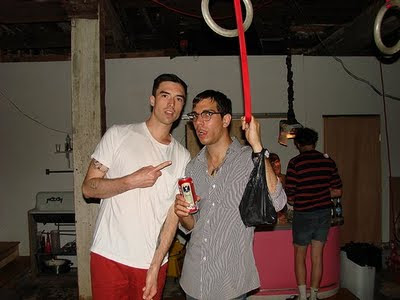 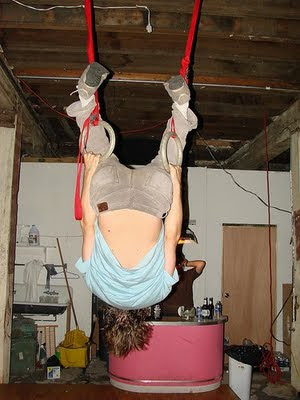 John (above, by the way) was awesome, again and I enjoyed his performance more this evening because the event on Friday was slightly overwhelming and I wasn't able to really take everything in. It was the first time I'd had a drink in ages, so I'm sorry to anyone whose ears I chewed off all evening (that is metaphorically speaking, not in a Tyson way!). Here are some more photos of John: 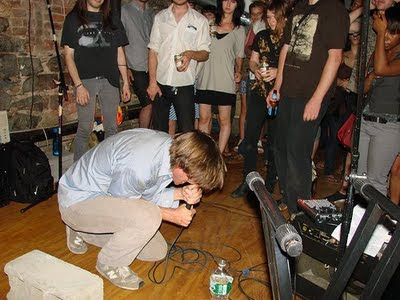 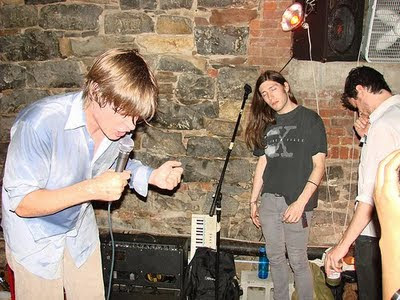 It was great to get a few days off from shows (yeah, honest, it isn't our whole lives), and we spent quality time in galleries, eating dumplings, drinking bubble tea, buying books (I'm sorry, I knew I said I wouldn't but I AM POWERLESS) and records and generally hanging out. New York is like a comfortable t-shirt, it is familiar and enough like home to adjust to quickly and easily. I can still laugh now thinking about John Wiese telling me he was going to die in the MOMA bookstore, and about the film called SSSSS that Avi found in his horror movie anthology book (we devised a complicated skit in which you had to pretend to be the plugger/PR company handling the movie and you were ringing people up about it:
"Hi my name is Ms Titley and I'm ringing to tell you about a great new film we're working on called SSSSS,"
"I'm sorry, I didn't catch the end of that, the film's called what?,"
"SSSSS,"
"I think we may have a bad line," ad infinitum.)

Also there was no experience more bizarre than being in one of the really expensive bars at JFK while waiting to our flight to LA and watching the Jackson funeral on the TV. So wrong, but so right.

There are more photos at the flickr link on the right. Thanks again to everyone who made it all happen, for all the amazing recommendations and for everything!
Posted by UPSET THE RHYTHM at 09:42 1 comment: