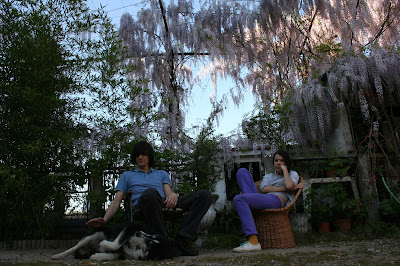 Good thawing, I mean morning!
Huge thanks go out to everyone for coming to our Pete Swanson show last week, what a powerful performance; both sinuous and truly visceral! Those same qualities are both going to be echoed at tomorrow's show for Portugal duo TROPA MACACA too. TROPA MACACA enshrine a tribal-digital form of instinctual electronic music that's as infectious as it is adventurous. Joining them on tour is HELM, who released one of our favourite records from last year, "Impossible Symmetry" on Pan. Opening the show at The Sebright Arms we have mesmeric bucolics from THE FRACTAL SKULLS, whilst LONDONEARS will be DJing for us much weird-out jams throughout the night. Really looking forward to it!
Full details appear as if  by magic…

TROPA MACACA are the ambient-noise duo of André Abel and Joana da Conceição and have been going strong from their Portugal home base since 2005, whilst glooping out into the world with releases via Qbico and Siltbreeze. The newly released follow up to 2009′s 'Sensação Do Princípio' on Siltbreeze, 'Ectoplasma' finds Tropa Macaca moving to Software Records (the sub-label of Mexican Summer owned by Oneohtrix Point Never’s Dan Lopatin) and was described by Dummy Magazine as “a lesson in pure sound design as potent as SND or Aaron Dilloway, yet filled with an unctuous listenability, a primordial, glowing slime that’s as addictive yet stately as the best in the genre”, which pretty much captures their sublimating electronic trip.
http://www.tropamacaca.com/ectoplasma.htm

HELM is the solo project of Luke Younger, one half of the London/Berlin noise duo Birds Of Delay, and label boss at Alterstock Records. He has just released “Impossible Symmetry”, his third full length record, on the brilliant Berlin based PAN label. It marks a new chapter in the artists' canon as it's his first to be informed by live performance rather than studio experimentation, incorporating more extensive use of electronic elements and moments of rhythmic dark ambience recalling the outputs from early Coil and Cabaret Voltaire at times.
http://alterstock.blogspot.co.uk/

THE FRACTAL SKULLS is the musical project of 25 year old Buckinghamshire based Chris Smith. Using the basic building blocks of analogue generated loops and minimalist drone, and drawing influences from the classic Krautrock of Cluster and Harmonia, as well as dub pioneers like King Tubby, The Fractal Skulls weave subtly evolving patterns of hypnotic sound to produce kosmische music that transcends the sum of its deceptively simple parts. Debut full length LP, ‘Rayleigh Scattering’, was recently released on Subexotic Records. The album was composed over a two year period during which Chris travelled widely, and the music is steeped in the atmospheres of locations as far afield as Croatia, Paris, and New York City, as well as the bucolic surrounds of the English countryside in which much of the work was laid down.
http://fractalskulls.com/


Great!  One last thing before we depart, our friend is organising a brilliant show at Cafe Oto this Saturday for RICHARD YOUNGS, DAMON & NAOMI and SEAMING. Sounds like a winner, here's some more info if you fancy it: http://www.cafeoto.co.uk/richard-youngs-damon-and-naomi-seaming.shtm
Thanks for reading as always,
See you tomorrow,
UTR
x

Upset The Rhythm and SPACE present two evenings of video and music
as part of HUMAN WAVE: The Videotapes of Raymond Pettibon...

Posted by UPSET THE RHYTHM at 01:44 No comments: 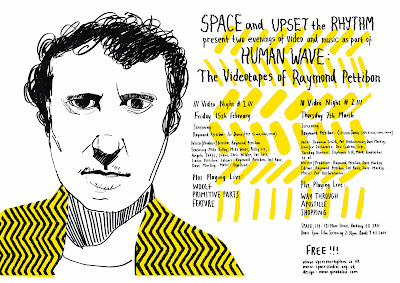 Thank you Gina!
Posted by UPSET THE RHYTHM at 04:52 No comments: 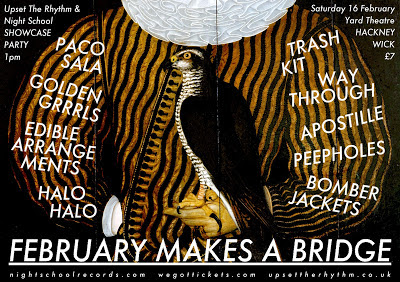 'February Makes A Bridge' is a double record label showcase uniting Upset The Rhythm with Night School in the aim of taking the DIY concert out of it's expected parameters and into interesting new pastures to enhance the potency of the music and its effect on the audience.

Taking it's name from one of George Herbert's proverbs, 'February Makes A Bridge' not only signifies a coming together to leap into the sunshine of the new year, it also attempts to link the event with its setting, The Yard Theatre. The Yard Theatre is a newly built raked amphitheatre in the Elizabethan style constructed in a once dormant warehouse in Queen's Yard, Hackney Wick. Herbert was born during the reign of 'The Virgin Queen' and we can hear his February echo in this building, with this event.

'February Makes A Bridge' will take place on Saturday 16 February from 1pm - 11pm at The Yard Theatre.
The full address for the event is The Yard Theatre, Unit 2, Queen's Yard, Hackney Wick, E9 5EN
Tickets cost £7 and are available here: http://www.wegottickets.com/event/200040

Performing at this special one off event are the following acts affiliated with Night School and Upset The Rhythm:

TRASH KIT
Face-painted flag-bearers with a wild feel for melody and a heartfelt kick inside each song.
http://trashkitrules.blogspot.co.uk/

WAY THROUGH
Land-locked pastoral punk, informed as much by the field as the fly-over.
http://waythroughwithyou.blogspot.co.uk/ 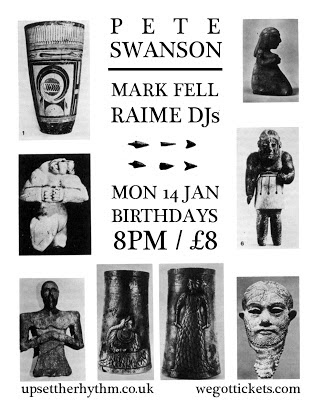 PETE SWANSON is a New York-based musician, once a member of the exhilarating noise duo Yellow Swans, he’s been making plenty of solo music since they disbanded in 2008. Straddling a line between free guitar noise and singed electronics, Swanson's recent album on Type, ‘Man With Potential’, shows that Pete now lives in a techno multiverse, where the dank pulsing soundscapes that helped birth his old band have only got wilder. Whilst Yellow Swans used pulses to underpin their cascading white noise, Swanson puts the chattering 140bpm percussion at center stage, not least on the album’s opening track, charmingly titled ‘Misery Beat’. Setting the stage for the music to follow, we are thrown into chattering synthesized squeals and dense kick drums before being smacked around the head with the kind of slippery noise lead we’ve not heard since ‘Going Places’. This is Birmingham techno filtered through the mists of the Pacific Northwest, and all the better for it! Elsewhere ‘Remote View’ explores a more downtempo sound; coming across like post apocalyptic house music as heard from a club bathroom. With ‘Man With Potential’ and it's follow up EP 'Pro Style', Pete Swanson has crafted his most defining statements to date; a blistering collection of contemporary club music with a deafening noise twist. It might not be easy listening, but who said life had to be easy?
https://soundcloud.com/pete-swans

MARK FELL operates uncompromisingly on the bleeding edge of digital music production. He's in possession of a beautifully rare talent; the ability to make highly academic music with an innately, dare we say, accessible edge. He himself and many others may not agree, but there's something so listenable to his rhythmically-driven and melodically aware style that we can't help but hear him in that context. As half of the seriously goalpost moving SND, and more recently responsible for the unspooled but strangely disciplined house productions on Editions Mego's Sensate Focus 12" series, one might've guessed that the Sheffield-based artist was responsible, given his prior form deconstructing garage and techno. It's Fell's digital synthesis where the real magic lies. The dreamy melodies and uncanny repetitions, not to mention the sheer unctuousness of the sounds employed lend him a sonic topology of his very own that well worth losing yourself in. Mark Fell has records available now through Editions Mego, Raster-Noton, Line and Hobby Industries.
http://www.markfell.com/wiki/

RAIME (DJ set) are Joe Andrews and Tom Halstead, an enigmatic London-based duo seeking to re-establish electronic composition as a physical and emotionally inquisitive force. Their debut album, 'Quarter Turns Over A Living Line' was released on sharp London label Blackest Ever Black last November to rave reviews, and this show sees them DJing throughout the evening.
http://blackesteverblack.blogspot.co.uk/
Posted by UPSET THE RHYTHM at 01:29 No comments: 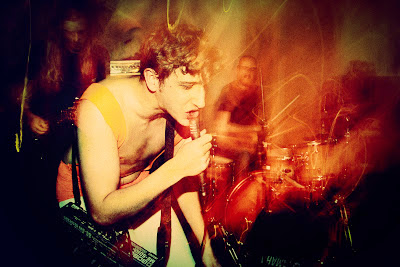 Starting out in the better half of the last decade, Cleckhuddersfax have more strings to their bow than most bands - the four piece scramble through genres like a lightning hit on a record shop. Broadly speaking their music is soaked in new wave bounce, pools of progressive slop and middle eastern arcs, all driven onwards by the insistent pulse of glam punk forgotten.We released their brilliant album 'Spen Beck' back in 2010 and this January sees them hit European roads playing shows all over. Look out below...