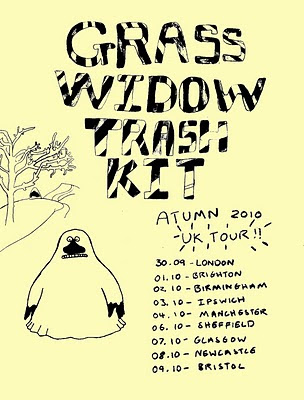 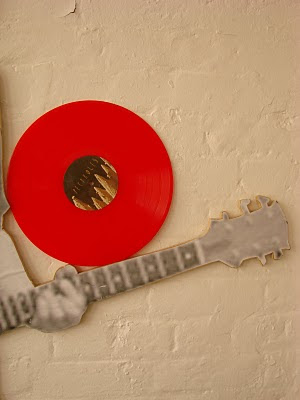 Yes, our new record from Peepholes and Apatt is released this week. It's a solid slab of heavy euphorics, throbbing hollers and oddball instrumentals all captured on "blood red" vinyl.

PEEPHOLES are Katia Barrett and Nick Carlisle who take turns singing, drumming and synth-prodding whilst smiling a lot and running back and forth on stage. Their songs, often cloaked in a cloud of echoing atmospherics, throb with raucous beats and jab you in the eye when you're not looking. It's party music for the lost at sea - sometimes primitive, sometimes soaring, but never boring. Their side of the 12" is called KINGDOM and features the following tracks: Airforce Trainer, Batwingy, Alpine Song, Sleep In The Shower, Pulling Cars and Carnivore 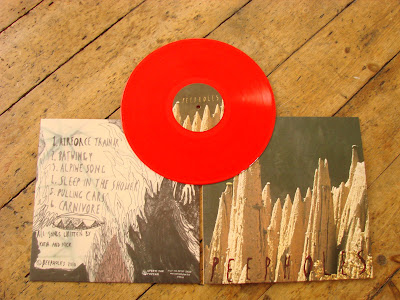 a.P.A.t.T. are a collective formed in Liverpool in 1998 and are pretty much impossible to classify! United by their branded nurses' outfits, but performing with everything from 2 to 7 members and going through a constant evolution of hardware and software changes, the group fuses mathy, synth-led moments with almost Klezmery freak-outs rendered in accordion, strings, brass and piano. Think the missing link between The Locust, Danielson Famile and A Hawk and A Hacksaw and you may be getting close! Their side of the 12" is called PAUL THE RECOD and features the following tracks: The Village Idiot, Candlelight, 10 Downing Street, Taxi Driver, I Fucking Hate Tamla Motown, Everybody's Talkin' and Maggot Fairy 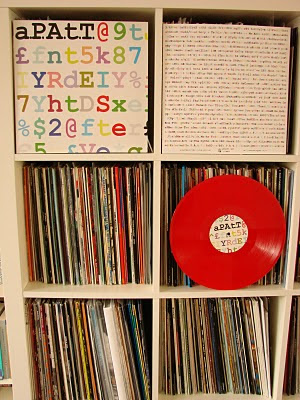 The record is available now in shops around the world specialising in music and it is also available now online through itunes, boomkat, emusic etc... BUT most importantly it's...

x
Posted by UPSET THE RHYTHM at 05:30 No comments:

Poster on your wall 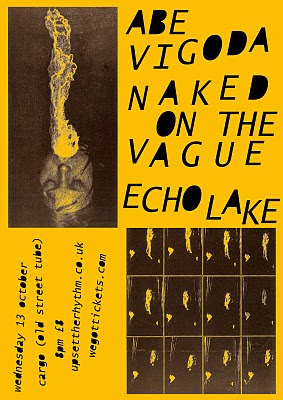 Posted by UPSET THE RHYTHM at 08:18 No comments:

Mylinh and David are the BEST!!!

This is the 100% official 'unofficial video' for New Orleans!

Posted by UPSET THE RHYTHM at 07:07 No comments: 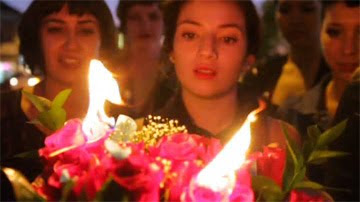 This is one of our favourite tracks from Freddy's upcoming album 'New Love', out on Upset The Rhythm on November 9th!!! The video just premiered on Pitchfork today and you can watch it above. Directed by Michael Fierstein, the video inspired by "New Orleans" features a young women pushing away the idea of "love" that she fells she no longer wants and has been forced upon her. It was shot in the Silverlake and Echo Park districts of Los Angeles over the course of two days. Burning flowers are such a potent image I can't believe I haven't seen that before. DARK
x

"If you leave this city take me with you, or don't look back"
Posted by UPSET THE RHYTHM at 07:02 No comments:

Hello everyone!
Our Dan Deacon show TONIGHT is now taking place at FABRIC due to technical issues with XOYO. Here's the times for you and we'd appreciate it if you could help spread the word, thanks! 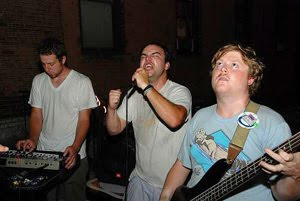 Hey everyone!
Stop the presses... FUTURE ISLANDS are going to play tomorrow evening's show too as they wanna warm up before braving the wild's of Europe, super lineup alert!!!
Yours,
UTR

IDIOT GLEE comes from Lexington, Kentucky and has a sound that lies somewhere between Jens Lekman’s thoughtful crooning and the classic auteur-pop of Brian Wilson or even Another Green World’s Brian Eno. James Friley, who is Idiot Glee, creates songs that resemble lo-fi, fuzzy, scratchy versions of tunes from a musical about the late 1950s directed by David Lynch. Friley describes what he does as "post-doo wop", the music being light on instrumentation and heavy on vocal harmonies, it's got a similar spectral feel to Perfume Genius but also sounds deeply haunted by the ghosts of Bobby Vee, Bobby Vinton and Bobby Darin. Idiot Glee have a 7" EP out now on Hop Hop from Lexington and a forthcoming single planned with Moshi Moshi, they are currently on tour in Europe with Women.
http://www.myspace.com/idiotglee

FUTURE ISLANDS are a new-wave dance band from North Carolina, now residing in the fertile "music capital of awesome", Baltimore. Future Islands play a terse yet passionate music wrought from a stripped back palette. Gerrit Welmers' cartwheeling synthesizer melodies tumble across the austere wilderness of William Cashion's post-punk bass pulse, driven ever forward by an ecstatic feel for rhythm. Perhaps the most striking aspect of the band's sound however, takes the form of Sam Herring's guttural vocal, delivered as Glen Danzig if he ever found himself in a Shakespearean tragedy. At times on its knees at others belted out like it's the end of the world, Herring's vocal lends a raw emotional warmth to the group's resolute synth-punk bounce. Debut album 'Wave Like Home' was released on Upset The Rhythm, whilst new album 'In Evening Air' came out on Thrill Jockey earlier this year to great reception.
www.myspace.com/futureislands

MOON UNIT are an elevating Glaswegian trio consisting of Ruaraidh Sanachan (Nackt Insecten), Andreas Jonsson of Lanterns, and Peter Kelly. Moon Unit write songs with a cosmic magnitude whilst trying to keep things as telepathic as possible. They have a debut LP available through Krayon Recordings and a new record on Blackest Rainbow called 'Hell Horse And Heady Stratus'. The five tracks on this new LP make up one of the best psyche out, freak out full lengths we've heard this year. It's an incredible record filled with furiously wild drum explosions, keyboard zone outs, sci-fi guitar shredding, and wailing feedback.
http://www.myspace.com/wearemoonunit

SLUSHY GUTS is a deliberate stripping back to basics, a concerted effort to write a song one could whistle and an exercise in embracing fear. At once melodic and dissonant, poetic and honest, intimate and claustrophobic, Slushy Guts is awkward pop music, naked and uncomfortable, a bundle of subtle unease and a maze of contradictions, a too long sentence, a load of heartfelt non-sense. It tried to just be happy but got confused and came out kinda sad. The recent ' LIV EATT HEW IND MILL' EP and the '5 Songs Forgotten Or Mum's Obviously Punked' CDR are available now through Chaos Vs Cosmos.
http://www.myspace.com/slushyguts
Posted by UPSET THE RHYTHM at 08:12 No comments:

Get acquainted with one of our favourite U.K. bands, Peepholes. Kat & Nick tell us the story of how they became best friends and acknowledge a special person as their biggest influence. See them energise Offset Festival with performances of Sleep in the Shower, Kingdom, and Alpine Song.

Directed, filmed & edited by Charles Chintzer Lai. Hosted by Andy Disgusting and Freya Watson.
Posted by UPSET THE RHYTHM at 03:46 No comments:

Nika Roza Danilova of Zola Jesus talks to us about challenging the media-constructed narrative of her identity as a goth, her favourite sci-fi novelist, and how she learned to believe in love. See and feel her stunning live renditions of Run Me Out, I Can't Stand, and Trust Me.

Directed, filmed & edited by Charles Chintzer Lai. Hosted by Felix Lee.
Posted by UPSET THE RHYTHM at 02:05 No comments: