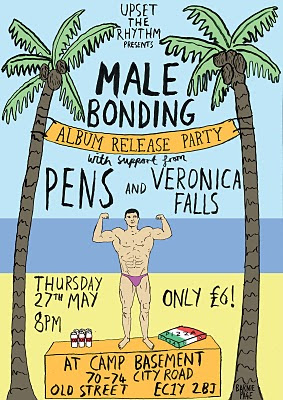 Major thanks to Barnie Page for this unreal poster!
x
Posted by UPSET THE RHYTHM at 05:49 1 comment: 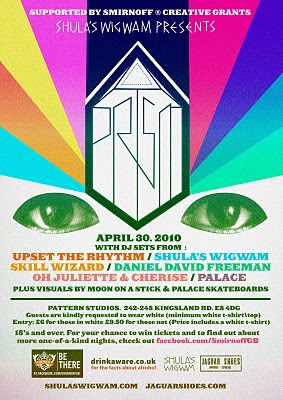 Posted by UPSET THE RHYTHM at 02:12 No comments:

CHAIN AND THE GANG get to grips with our unruly banner 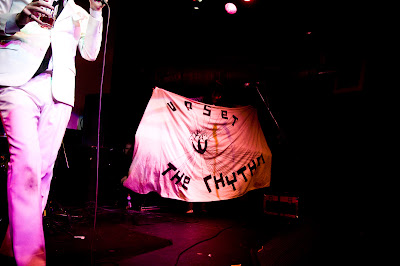 Thank you Owen for the photo!
x
Posted by UPSET THE RHYTHM at 09:48 No comments:

TALK NORMAL IN THE UK 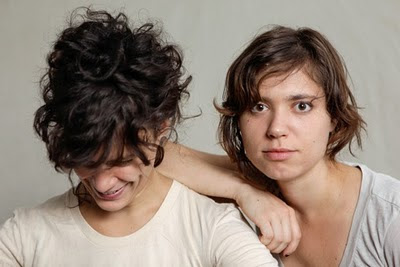 TALK NORMAL UK TOUR
-=-=-=-=-=-=-=-=-=-=-=-=-=
Monday 26 April – LONDON – Cargo w/ Crystal Antlers + Teeth
Tuesday 27 April – BRIGHTON – Hector’s House w/ Peepholes
Wednesday 28 April – SHEFFIELD – Penelope’s
Thursday 29 April – GLASGOW – 13th Note
Friday 30 April – NEWCASTLE – Star & Shadow
Saturday 1 May – NOTTINGHAM – The Chameleon
Sunday 2 May – MANCHESTER – The Angel Centre
Monday 3 May – LONDON – Camp Basement w/ Viv Albertine
TALK NORMAL was born with rigorous beats, post-punk dissonance, and darkly evocative vocals from the friendship of Sarah Register and Andrya Ambro in 2007. Forming in Brooklyn their lightning-strike first guitar-n-drums appearance followed quickly whilst their sound stormed upward and outward, referencing few and relating to many, a jarringly songful gale of rhythm and noise supporting pleas and plaints, signal-calls and marching orders. Echoes of No Wave-era noisemakers - particularly the dogmatic rants of Lydia Lunch's Teenage Jesus and the Jerks and the urgent abstractions of Ut were unmistakable. But the duo also has firm roots in the present New York underground, specifically the noise-rock of veteran trio Sightings, whose Richard Hoffman guests on their records and often performs onstage with them too. After a couple of years having done-it-themselves; including self-released demos, the 2008 EP 'Secret Cog' and shows played alongside Marnie Stern, Major Stars, Chris Corsano and Magik Markers to name just a few, Talk Normal have now perfected their heavy eerie quality of their music, surpassing the cavernous territory first dug out by the early dirges of Sonic Youth and Swans. Talk Normal released their debut album 'Sugarland' on Rare Book Room Records last year and it instantly became one of our favourite records of the year, we are very excited to have them over in the UK on tour for Upset The Rhythm.
http://www.myspace.com/talknormaltalknormal

Talk Normal "In a Strangeland" from Rare Book Room Records on Vimeo. 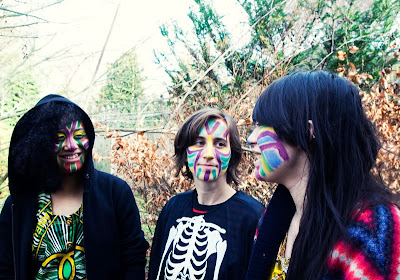 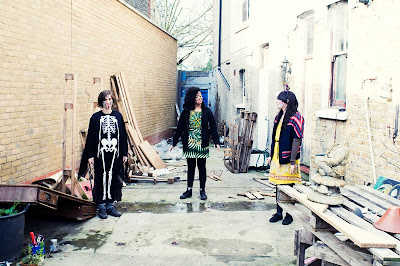 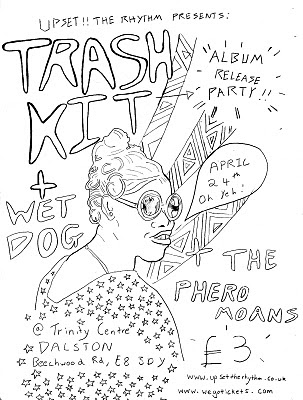 TRASH KIT are a gang of facepainted flag-bearers who have a wild feel for melody and a heartfelt kick inside each song. Mixing chaos, considered songcraft and overlapping harmonies in equal measure, the female trio sound as joyful as they are focussed. Rachel Aggs, Rachel Horwood and Ros Murray formed the band in early 2009, and since then have been lighting up London, energising the UK underground with their raw performances and promise. Trash Kit have a sound of their very own, it's both urbane and primal, drawing on the potential of punk and the naturalism of an internal folk music. Tonight celebrates the release of their much-anticipated, self-titled debut album on Upset The Rhythm.
www.myspace.com/trashkit

WETDOG shake their coat and all manner of dirty pretty sounds fall out, demanding inspection. Exhuming and embracing the post-punk aesthetic of The Slits and Au Pairs, they're unlikely to make you ponder your navel and cry, but certs to get you smashing things up with wanton cathartic aggression. Splendid deadbeat drums, lumbering bass and wilfully mis-tuned guitars urge Rivka Gillieron's voice to yelp and admonish - early Banshees stylings are retooled until every sudden rhythm shift counts. Latest album 'Frauhaus!' is out now on Angular Records.
www.myspace.com/wetdogthebest

THE PHEROMOANS are five young men from the suburban hard shoulder that lies between London and Brighton. The quintet have a cavalier approach to their instruments. Everyone seems to get a go at everything, with an admirable disregard for whether they can play it very well or not. Somehow this approach translates into DIY shamble avant garage at its finest in the tradition of The Keggs, Swell Maps, & Danny And The Dressmakers. Catch their new single on Savoury Days out now and future LP on Convulsive coming soon.
www.myspace.com/pheromoans
Posted by UPSET THE RHYTHM at 03:47 No comments: 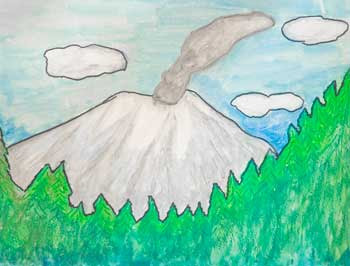 1. THE STICKS will not be playing at the Chain and the Gang show on Monday 18th April as they are stuck in Europe with no chance of getting back for the next few days. We are gutted and wish them a safe journey back to Blighty!

2. We use airmail for our postal orders outside of the UK which means that those of you who have ordered from us in the last week are going to have to wait a while to get your mail. Apologies!
Posted by UPSET THE RHYTHM at 12:38 No comments: 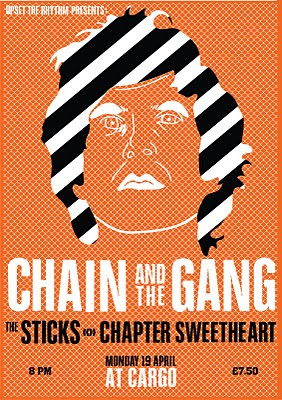 By Diego Mena, screenprinted copies available from the show!
x
Posted by UPSET THE RHYTHM at 05:13 No comments:

yeh THE PHARMACY album WEEKEND is released next week!

x
Posted by UPSET THE RHYTHM at 02:20 No comments: