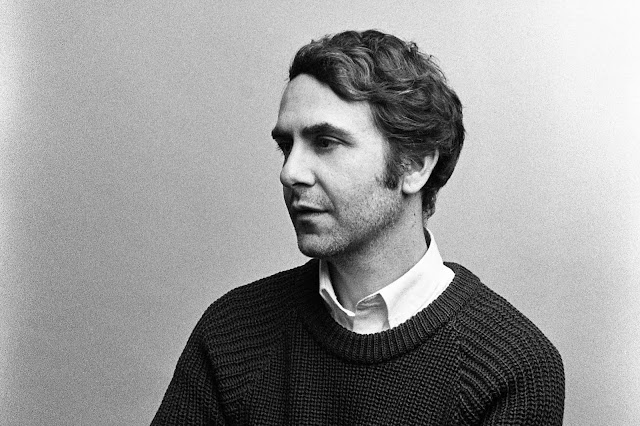 CHRIS COHEN’s songs initially sound easy. They’re each tiny jewels that unfurl at a leisurely pace, but dig a little deeper and you’ll reach a melancholy core. His previous two albums, 2012’s ‘Overgrown Path’, and 2016’s ‘As If Apart’, were built from lush, blurry tracks that embedded themselves in your subconscious, like they’d always been there. ‘Chris Cohen’, his new solo album on Captured Tracks, was written and recorded in his Lincoln Heights studio and at Tropico Beauties in Glendale, California over the course of the last two years. Cohen would sing melodies into his phone, fleshing them out on piano, then constructing songs around the melodies, and later, adding lyrics and other instrumentation with the help of Katy Davidson (Dear Nora), Luke Csehak (Happy Jawbone Family Band), Zach Phillips, and saxophonist Kasey Knudsen, among others. It is his most straightforward album yet, but it is also the conclusion of an unofficial cycle that began with ‘Overgrown Path’. ‘Chris Cohen’ is an album about pain and loss but it’s also about accepting loss. Of the song “Green Eyes,” Cohen says “[It’s about] the men in my family and how they passed their worldview along to each other from great emotional distances. My father and grandfather were full of secrets and longing, which were communicated through everyday actions like driving a car or cooking a meal. We all wanted closeness, but never found it in each other.” This is a statement about a specific song, but it is also a statement about the album as a whole: it’s a beautiful sound, but it’s also unflinching in its depiction of emotional turmoil.
https://chriscohen.bandcamp.com/

NEW SHOW: Advance Base in London this July! 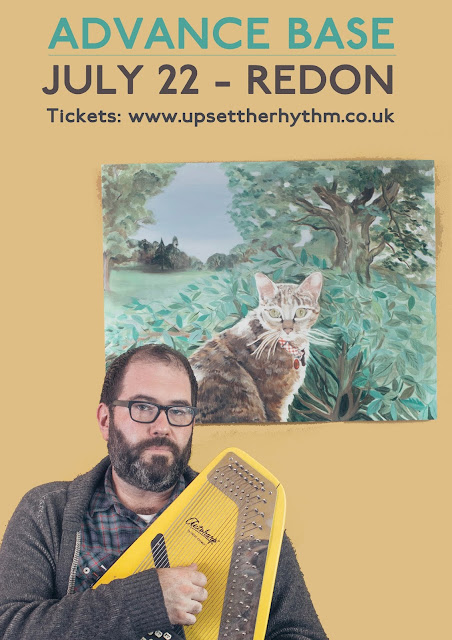 ADVANCE BASE is the electronic solo project of Chicago, IL singer/songwriter Owen Ashworth (formerly of Casiotone for the Painfully Alone). Using a two-handed arsenal of electric pianos, autoharps, Omnichords, loops, samples & drum machines, Ashworth builds minimalist, heavy-hearted, & nostalgia-obsessed tunes around his conversational, baritone vocals. The sound of Advance Base has been described as "lo-fi," "depressed" & "weirdly uplifting." Advance Base has supported live dates for The Postal Service, Pedro the Lion, The Mountain Goats, Dean Wareham, Alan Sparhawk, Mark Kozelek & Stephin Merritt. The debut Advance Base album, ‘A Shut-In's Prayer’ (2012), was released by Caldo Verde Records & Ashworth's own Orindal Records. ‘Nephew in the Wild’, the second album by Advance Base, was released in 2015 by Orindal Records & Tomlab Records. PopMatters named ‘Nephew in the Wild’ the number 1 Indie Album of 2015. ‘Animal Companionship’, the third & most recent album by Advance Base, was released last September. The sound of the album is soft and thick and comforting. And when we’re working with songs as sad as the ones that Ashworth writes, that level of comfort really comes in handy. He used to write sad love songs, or sad songs about love. He’s still doing that, really, except that he’s now middle-aged, with a wife and kids, living in suburban Chicago, and the songs reflect that. The songs on ‘Animal Companionship’ are full of a whole life’s worth of regrets and missed opportunities and moments of acceptance and dead friends. It’s not as bleak, either; there are moments of happiness, or at least sustenance, sprinkled all through ‘Animal Companionship’. But in its sharp and unrelenting and empathetic specificity, this is some real masterly heart-wrecker music.
http://advancebasemusic.com/

Posted by UPSET THE RHYTHM at 02:32 No comments: 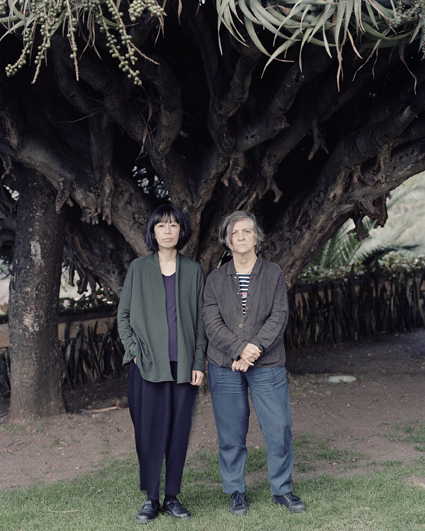 
ANA DA SILVA & PHEW have a new collaborative album entitled Island, full of absorbing textures, tactile beats, and a masterfully dynamic compositional style. Each cavernous track feels like a conversation, and out of the ominous dark comes a generative hope. Ana and Phew contribute pointillist bits of spoken word in each other’s native tongues of Portuguese and Japanese, reflecting on isolation, friendship, and nature. The quotidian is made profound. A gripping mood is set by the shared stoicism and subtle playfulness of these two cult punk icons. Island’s logic is one of wise minimalism. There is a feeling of discovery that will be familiar to Raincoats fans—a sense of poetry and inquisitiveness, of intuition and invention, of new languages taking shape.

Ana da Silva is a founding member and songwriter of the pioneering post-punk band The Raincoats. Across four daring full-length records, The Raincoats helped shape the timeless notion that punk is what you make it - an act of raw expression, not any one sound. The Raincoats have offered creative and spiritual inspiration for several generations of artists. They set a crucial precedent for feminist work within a DIY punk context, marked all the while by Ana’s poetic lyrical style and innovative noise guitar playing.

After The Raincoats’ hiatus in 1984, Ana collaborated with The Go-Betweens, This Heat’s Charles Hayward and choreographer/dancer Gaby Agis. Ana returned to song writing and performing with The Raincoats after Kurt Cobain invited them to tour with Nirvana shortly before his untimely death in 1994, and they released an album ‘Looking in the Shadows’ in 1995 on DGC and Rough Trade. In 2005, Ana released her solo debut, ‘The Lighthouse’ - a self-recorded collection of spare, elegant experiments in electronic indie-pop. Ana’s recent appearances with The Raincoats include a 2016 collaboration with Angel Olsen for Rough Trade’s 40th anniversary, as well as a 2017 presentation at The Kitchen, New York of The Raincoats and Friends, a celebration of Jenn Pelly’s book The Raincoats.
http://www.anadasilva.net/

Phew consolidated her binary interests as a vocal performer and analogue electronics improviser with the 2017 release of her album ‘Voice Hardcore’. Indeed, since her 2013 conversion to analogue electronics Phew has continued evolving her live solo project around the world. In 2015 she released her first almost entirely solo-driven album, aptly titled ‘A New World’, on the Japanese label Felicity featuring nine songs backed by herself on electronics and drum machine, with contributions from Deerhoof guitarist John Dieterich, and synthesizer / electronics player Hiroyuki Nagashima.

In 1978 Phew started out as the singer in Aunt Sally, the Osaka punk group who released just one outstanding album on Vanity Records. A year later Phew released her debut solo single, produced by Ryuichi Sakamoto. In 1981 she made her debut solo album ‘Phew’ at legendary producer Conny Plank’s studio near Cologne, accompanied by Plank, and Holger Czukay and Jaki Liebezeit. She returned to Conny’s studio to make ‘Our Likeness’ (Mute, 1992) with Jaki Liebezeit, former DAF/Liaisons Dangereuses member Chrislo Haas and Einstürzende Neubauten’s Alexander Hacke. And in 2011, she and Erika Kobayashi formed Project UNDARK to record the texts of ‘Radium Girls’ with music by the late Dieter Moebius, of Cluster. In Japan she has made a series of acclaimed records under her own name and with leading bands such as Novo Tono and her contemporary punk group Most too.
https://phewjapan.bandcamp.com/

Posted by UPSET THE RHYTHM at 00:45 No comments: 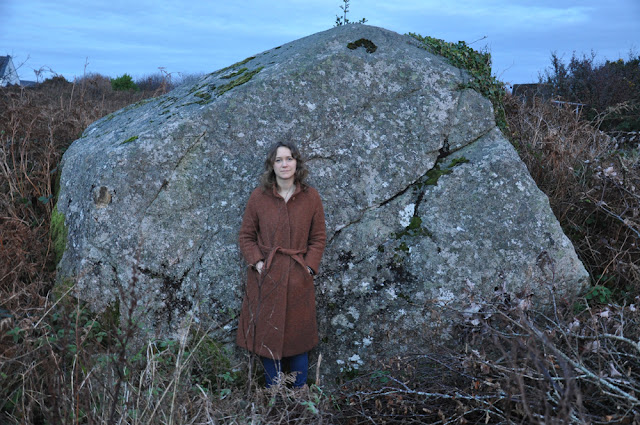 BRIGID MAE POWER is an Irish singer-songwriter and multi-instrumentalist who, like Judee Sill, Micky Newburyor Linda Perhacs before her, paints her songs in dreamily expansive strokes, transporting earthly compositions into universal and exultant realms. Her self-titled debut on Tompkins Square was a majestic suite of reverb-swathed laments for voice, guitar, piano, accordion, and harmonium, recorded at the Portland studio of key musical foil Peter Broderick. Themes include transformation, change, motherhood, acceptance, strength, courage and trust. In the words of Power, the album was about "trusting if you lose yourself or your way - you can come back". New album 'The Two Worlds' is another masterful collection of effortless, hypnotic folk, and an album that furthers the songwriter and multi-instrumentalist's already stellar reputation. Live, Brigid can encapsulate the timeless magic of her songs either solo or as a duo with Peter. Thus far she has toured throughout Ireland, UK and the US together with artists including Lee Ranaldo, Richard Dawson, Alasdair Roberts, Peter Broderick and Ryley Walker, with performances at Le Guess Who? and TUSK festivals along the way.
http://www.brigidmaepower.com/

AOIFE NESSA FRANCES is a Dublin born musician and singer-song writer. She is inspired by the poetic styles of folk music and psychedelic rock.
https://www.instagram.com/aoifenessafrances

“The Two Worlds coexist beautifully here, the soft Power and the raw” – UNCUT

“The Two Worlds churns like rough seas, Power’s voice veering between steely warning and piercing transcendence” – THE GUARDIAN
Posted by UPSET THE RHYTHM at 06:42 No comments: 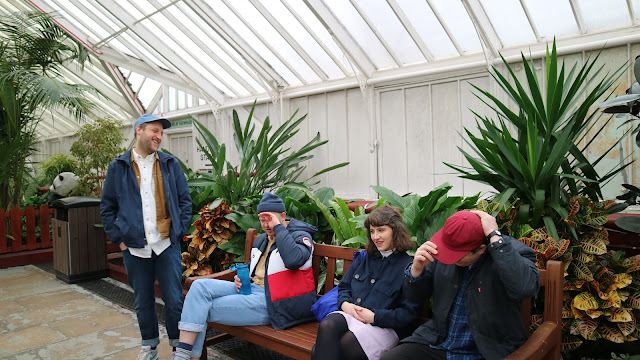 If there isn't yet a tradition of following a magnificent debut album with a, shoelaces-tightened, excellent mission statement of an EP (one would be forgiven to think that the debut long player was the mission statement already, breaking in on the scene/ry with such unmissable and rarely seen sensory delight, but then upon hearing the subsequently released EP one is tempted to think: "Wow! That debut was truly astonishing but now they are REALLY on a mission!"), well, if this tradition doesn't already exist - and thinking about Young Marble Giants' scene-defining "Final Day" 7", Pylon's absolutely essential "!!" 10" and Carla Dal Forno's recent-yet-already-classic "The Garden" 12" one might argue that this tradition is undoubtedly fully existent (more so: alive and well) — then this self-titled extended play from much beloved Glasgow quartet Vital Idles would surely be a striking argument for the genesis of such a tradition.

On the other hand, when taking sides with the many seasoned critics arguing that this tradition has indeed long been established, one might confidently list this effort as a bona fide example of such practice, sharing with the aforementioned not only an astute and accomplished artistic ability but also a sense of minimalist psychedelia that transcends restrictions set by redundant referencialism and grateless genre parameters such as "Post Punk" or "Minimal Pop" (on which the same critics, of course, often disagree).

The EP reveals itself as a steady, hypotenusal rise of intensity and momentum, starting with the hallucinogenic restrain of opener "Break A", building tension throughout the gothic-noise flourishes of "Seconds" and "Rustle Rustle" and culminating in "Careful Extracts", a 2 minute burst of carefree introspection that might as well be the unintentional answer to early career highlight "My Sentiments": "just me and my/ tired ire/ a a a a a a a a a a"

In conclusion: Vital Idles' debut was truly astonishing but - wow! - now they are truly on a mission.