Hey everyone!
This week we released TRASH KIT’s excellent new album ‘Confidence’ and to celebrate we’re throwing an album launch party tomorrow at Bethnal Green Working Men’s Club. Not only will TRASH KIT be playing but we’re very lucky to have solo sets from ANA DA SILVA of The Raincoats and ARRINGTON DE DIONYSO of Old Time Relijun planned too, whilst the ever-awesome AS ONDAS will open the show! Tickets are £5 and we will have some on the door from 7.30pm, live music kicking off around 8.20pm by the way! This will be our last show of the year so I hope you can all join us. We return in January with a special series of shows from one of our favourite artists RICHARD YOUNGS. These will all take part in Tower Hamlets in a trio of unusual places with support from TOM JAMES SCOTT, LAURA CANNELL and DYLAN NYOUKIS. Read on below for our full listing as well as new show announcements for DEERHOOF and TRASH KIT next February, including an Upset The Rhythm show in Belgium! Yep, Eurostar here we come! 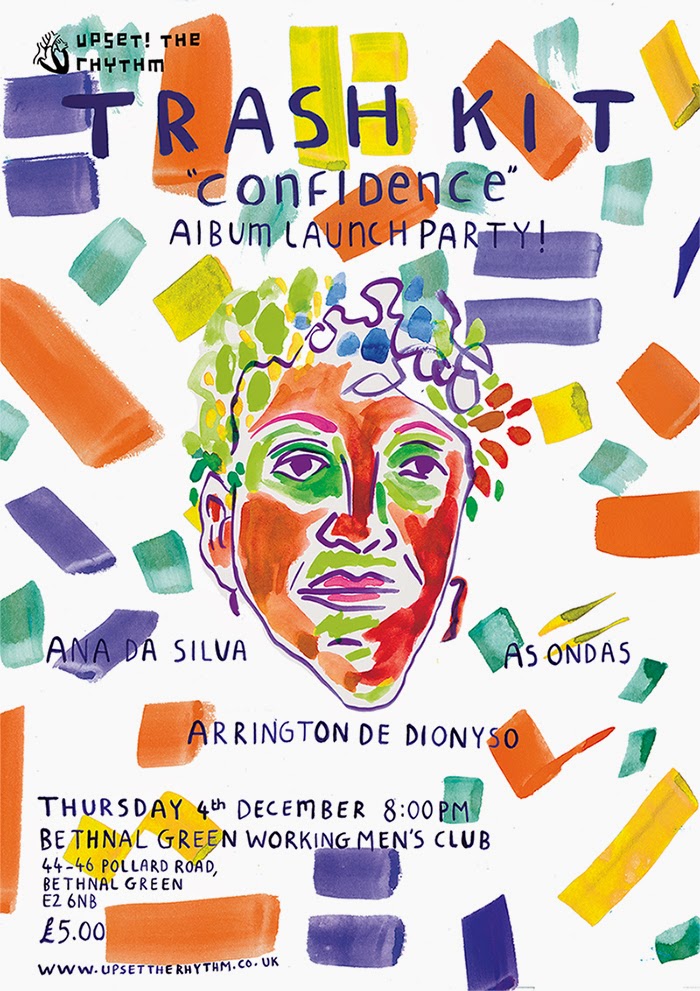 TRASH KIT have a wild feel for melody, writing songs that pull at the reins with a spontaneous charm. Having formed the band in 2009, Rachel Aggs, Rachel Horwood and Ros Murray have since become the glowing core of London’s DIY underground. Their music is primal yet thoughtful, affirming yet sincere, drawing on the potential of post-punk and the naturalism of an internal folk music. Although Trash Kit have their forebears in bands like X-Ray Spex, The Ex and The Raincoats, their sound is very much their own take on facing forwards. Galloping polyrhythms, overlapping sung-spoke lyrics and entwining guitars are all drawn together into a taut unity, sounding willfully alive. Both Rachels tangle their vocals with each other whilst expressive drumbeats and restless guitar flurries provide the rhythmic drive. Aggs’ guitar playing is as much informed by African fingerstyle patterns as the percussive attitude of various no wave shredders. Horwood approaches her drumkit with an untamable freedom, pushing it into the realm of a vivid lead instrument. Trash Kit's music is full of pauses, woven silence and punctuation too and this is where Ros Murray and her resonant, soulful bass work finds a perfect home.

As a follow up to their exuberant debut album, ‘Confidence’ sticks with the “play it all live” pluck we’ve come to expect from Trash Kit. There’s a minimal bent, a lyrical directness, an unadorned ethic that all evokes the sense that the song is being written at the same time as it’s performed. Yet whilst the first album at times felt too fleeting, its succinct songs flashing by so fast, ‘Confidence’ is startlingly more assured, allowing ideas to develop, conclusions to be gathered. Tracks like ‘Hair’, ‘Skin’ and ‘Boredom’ embrace dynamics like never before. Their clatter and chime are complimented through subtler passages of introspection and the occasional noisy breakdown, with snare and cymbals approaching roar. Ros is joined by her previous bandmate Verity Susman (of Electrelane) on a few tracks including the adventurous ‘Shyness’ and lead single ‘Medicine’, lending some fluently inventive saxophone flourishes. It all adds to the heady, sensation of free-falling through the album. A feeling that the horizon has become broader. ‘Confidence’ will be released by Upset The Rhythm on December 1st.
http://trashkitrules.blogspot.co.uk/

ANA DA SILVA is a founding member of the pioneering female punk band The Raincoats. Ana has continually worked on music, in some shape or form, since the group disbanded in 1984. Soon after the release of The Raincoats’ final album album, ‘Moving’, Da Silva collaborated with This Heat drummer Charles Hayward on a project called Roseland; they recorded a few demos together, but the duo faltered after that. She also wrote music for choreographer Gaby Agis' productions, but spent much of the '80s and early '90s painting and working in an antique shop. The Raincoats' reunion spurred Da Silva and the rest of the group to write new songs, resulting in the band's fifth album, 1996's ‘Looking in the Shadows’. Da Silva resurfaced in 2005 with her solo record ‘Lighthouse’, a largely electronic collection of songs that she wrote, recorded, and produced herself for Chicks On Speed records.
http://www.theraincoats.net/

ARRINGTON DE DIONYSO makes trans-utopian world music for a world that exists in fever dreams and hallucinations. Using performance and visual art, he traverses the nameless territories held between surrealist automatism, shamanic seance, and the folk imagery of rock and roll. He clarified his eccentric brew of ecstatic lunacy and prophetic madness during his 15 year tour-of-duty with Olympia’s Old Time Relijun. De Dionyso’s most recent project, Malaikat dan Singa, is a trance-punk outfit featuring bass clarinet, guitars, multiple drummers and his trademark wild vocals (multi-spectral harmonic throatsinging combined with grunts, yelps, and barks) often sung in Indonesian. Pushing the envelope between musicality and pure energy, between ecstacy and lunacy, he enwraps rooms with a deeply resonant sound.
http://arrington.bandcamp.com/

AS ONDAS are a band with fresh ideas, featuring members of Dog Legs, Shopping and Wachi Wachi they start their race with a sprint. With a spartan drum, bass and guitar lineup, As Ondas deliver up a delirious, chorus-drenched prom punk alongside the occasional post punk meditation.
http://asondas.bandcamp.com/ 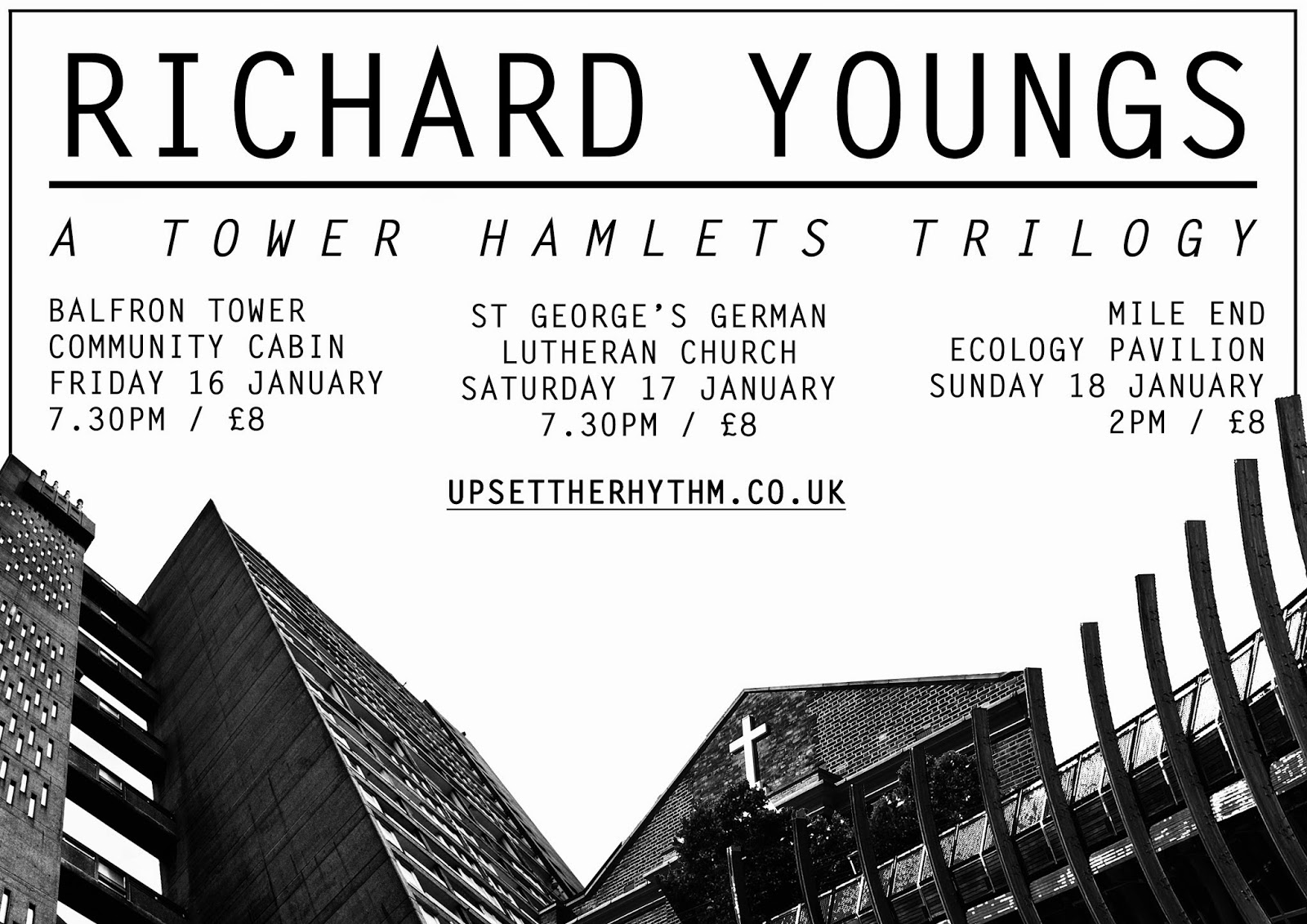 RICHARD YOUNGS is an iconic figure of the UK underground, having spent the last 30 years working on an incomparable output of solo records alongside numerous collaborations. Originally from Cambridge, but based in Glasgow for the last two decades, Youngs is as prolific as he is diverse turning his hand to lush folk hymnotics, a cappella minimalism, tactile improv, synth pop, hardcore punk and avant garde weirding. Youngs is even in a band with his six year old son Sorley and long time collaborator Andrew Paine called The Flexibles, who have a devolved industrial rock arc to them. All of these eclectic musics have amassed on almost as many labels with key releases being found on VHF, Jagjaguwar, MIE Music and Ba Da Bing! as well as on his own No Fans imprint. Over the years Richard has also lent his skills to a number of bands including Ilk, Vibracathedral Orchestra, A Band and Sunroof! as well as playing bass for Jandek during his debut series of live concerts, and has collaborated on joint works with Luke Fowler, Andrew Paine, Makoto Kawabata and Simon Wickham-Smith to name a few. Richard Youngs plays an eclectic range of instruments on these records from guitar to zither, homemade modular synth to recordings of a motorway bridge, yet central to all this is the importance he places on his own unadorned vocal, which almost acts like a rope pulling together all the disparate tangents and unpredictable projects into his very own transcendent realm of sound.
http://nofansrecords.wordpress.com/

For this very special trilogy of shows in London’s Tower Hamlets, Richard has been working with Upset The Rhythm to take live music away from its safe domain of established venues to somewhere different in search of a more radical and memorable experience. Over the three nights Richard Youngs will perform an entirely different in tune with each specific place and supported by the following artists:

TOM JAMES SCOTT is a classically trained musician interested in rich, densely treated atmospheres and lucid reflective moments. Tom's influences stretch far and wide, touching upon aspects of traditional music, improvisation, vocal music, composition, and field recording to name but a few. Tom's previous albums for Bo' Weavil, were both guitar based with added piano, distilled through a minimalist mind set to create some of the most beautiful elemental melodic lines that take the listener on a journey of meditative contemplation. 'Drape' is the title of Tom's recent LP of solo piano pieces. Strings of single notes become humming, shadowy resonances within the body of the instrument, echoing into frequent pause and fragmentation. New album ‘Teal’ was released last month on LP via Skire Music. Uniting all these records is Scott’s rare ability within ambience to stop everyday life dead in its tracks, forcing an invitation for consideration and contemplation at every moment.
http://skire-music.blogspot.co.uk/

LAURA CANNELL is a young woman drawing on ancient transcendental and earthly musics, playing fiddle, overbowed fiddle, double recorders, sometimes percussion and other rarefied wind instruments. Her sense of space, dynamics and working with acoustics is super sensitive. Whether solo or otherwise she explores the spaces between ancient, traditional and improvised music, often utilising a fragment from a medieval theme to her own end in a manner that embraces the apparitional, historical or the otherworldly. Her seemingly wild side, in such rarefied circles makes her involved yet emotive music really bristle and connect. Laura’s exquisitely-realised solo album Quick Sparrows Over the Black Earth was released in July 2014. Haunting chords move the heavy air of the church as fiddle drones drift across the flatlands of East Anglia. Her current live music show finds her performing improvisations on ‘over-bowed’ fiddle and double-barrelled recorders creating spell-binding new interpretations and breathing new life into lost and forgotten melodies from the 5th – 14th centuries.
http://www.lauracannell.co.uk/

DYLAN NYOUKIS (of Chocolate Monk / Blood Stereo) is a master of the vocal/performance stink and brain flummox. His solo vocal and tape work continues to push the envelope in terms of the expressive options offered by amplified physicality, making a music that’s so intrinsically human it feels like you're listening from inside of his jaws. Sounds range from the describable (gloveless hands messing with steaming innards) to the impossible (Dylan as a match-striking dog), his range of squelch and rumble unconstrained by bodily functions. His recent album 'Carrion Hut' collects five very different pieces recorded between 2003 and 2007. “The Frosted Growth” finds Nyoukis in Dubbletwee mode, snarling and barking at his multitracked self. While on the side-long “Late Night Vocal Gravy”, Nyoukis is at his most composerly. The real diamond, though, is the text piece “Strange New Ache”, originally written for Inside Wino Lodge but left off the final cut. The text – read out loud, inverted and mangled, by a half dozen-strong assemble of male and female voices runs. “These strange new muscles have started to ache, these new muscles won’t stop aching...”. Isn’t this what’s going on in Nyoukis’s lunatic sound poems? Psychosis felt as physical pain, delusions of the mind transferred into inexplicable sensation, expressible only in gibbers and howls.
http://chocolatemonk.co.uk/enter.htm

Thank you for reading, see you tomorrow!
UPSET THE RHYTHM
x